And it happened. Today, on the 7th of May 2013 on admiring-diversity first guest post appeared! I invite you to read the correspondent’s story from Finland…

This feast was celebrated already in pagan times, and was also known as the May Day. During the Christianization of Europe, the holiday, like many other pagan festivals (now Christmas, Easter and All Saints Day), was transformed. The name Vappu means Walpurgisnacht, and it derived from the Saint Walpurga, the English missionary who was canonized on the 1st of May 870 year. In Finland, the Holy Walpurgis Night is one of four grandly celebrated holidays (the others are: Christmas Eve, New Year’s Eve, and Midsummer Night).

Walpurgis Night is celebrated also in many other countries, like: Estonia, Sweden, Germany, the Netherlands, and the Czech Republic. Czech festival is called Čarodějnice from burning witches. Up to this day Czechs are burning hay-rag witches or brooms. This ritual is performed to chase the winter away.

Today Vappu is celebrated as a student party similar to Polish Juwenalia, with the difference that in Finland can celebrate everyone, and age determines only the intensity of the play. Like the other grand Finnish festivals, celebrations are concentrated on the Vappu Eve – the April 30th. The event begins in the afternoon. Cities are full of young people in typical costumes. Alcohol is being poured in huge amounts, with domination of sparkling wines and sima (homemade mead with a low alcohol content). At 18.00 the celebrations reach their climax – the statue of a naked woman Havis Amanda in Helsinki is being decorated with a student cap. In other cities, monuments also get their caps. In addition, in Helsinki during Vappu every two years are issued alternately two magazines with hearty humor: Äpy and Julkku. 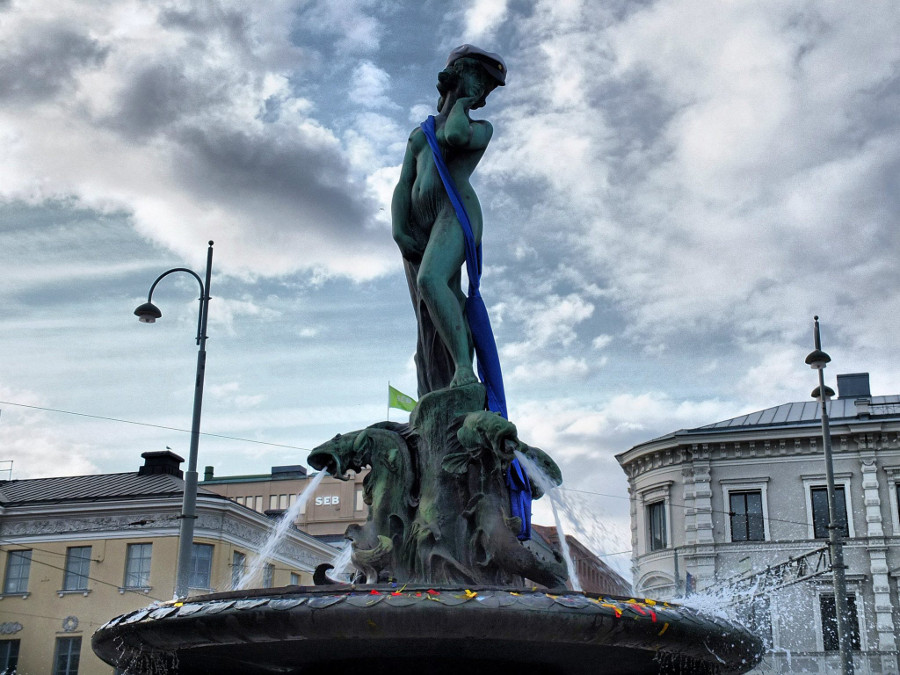 On Vappu even Havis Amanda gets new clothes

Celebrations on the 1st of May have a much calmer character. All the inhabitants of Helsinki congregate in parks feasting and drinking alcohol. The most crowded place can be found near Ursa observatory in the park Kaivopuisto. There you can meet people sipping champagne from glasses (which are regularly refilled), as well as groups of people sitting at the picnic baskets or tables laden with food. In Finland, drinking alcohol in public places is legal except certain large cities. During Vappu these prohibitions do not apply anywhere. Despite the relatively low temperatures (sometimes even snow is falling) crowds line up to ice cream parlors. One can also use a mobile sauna. During Vappu nothing should surprise us. One can meet old ladies walking by with a glass of champagne in hand and a bottle sticking out of the bag. Gray-haired men in student caps, in a state that highlights their many Vappu experiences. Through the streets drive people in antique cars. Motorcycle season is open.

The unique atmosphere of Vappu was best described by a mature gentleman who explained the phenomenon to me on that day: “This is the day when you can go out, drink with your friends in the fresh air. The wife does not complain, children do not cry. This day is special, and definitely not like Christmas”.

Similar to the sailor hats – each university has its own unique model, some have a pompon. More information here. 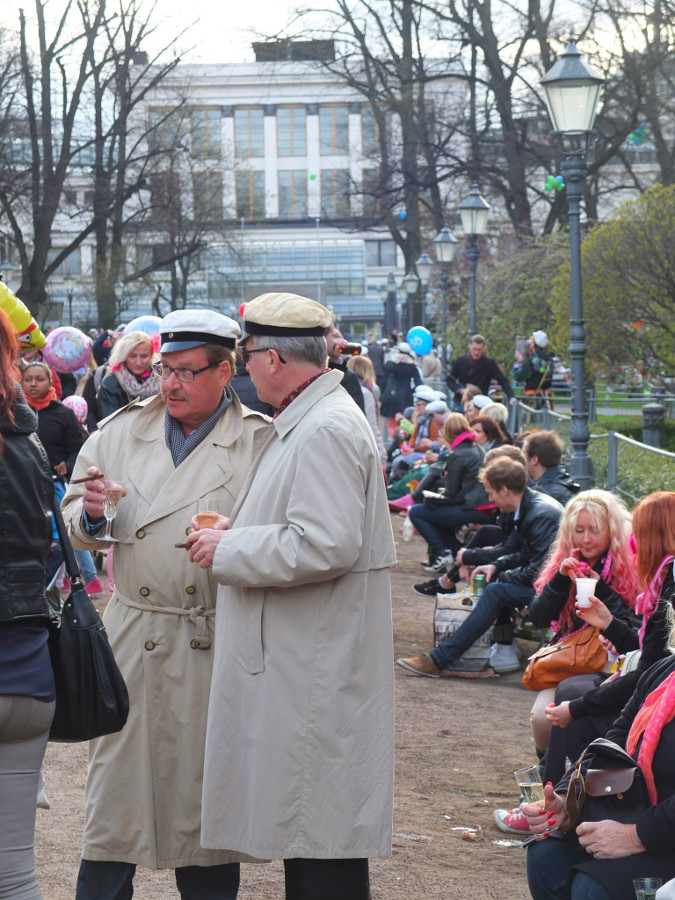 Similar to working overalls, decorated with hundreds of patches, color indicates the year of study. The tradition originated in Sweden, where students went to parties straight from the lab in overalls and aprons. It was quickly discovered that the costumes are resistant to dirt and stains. 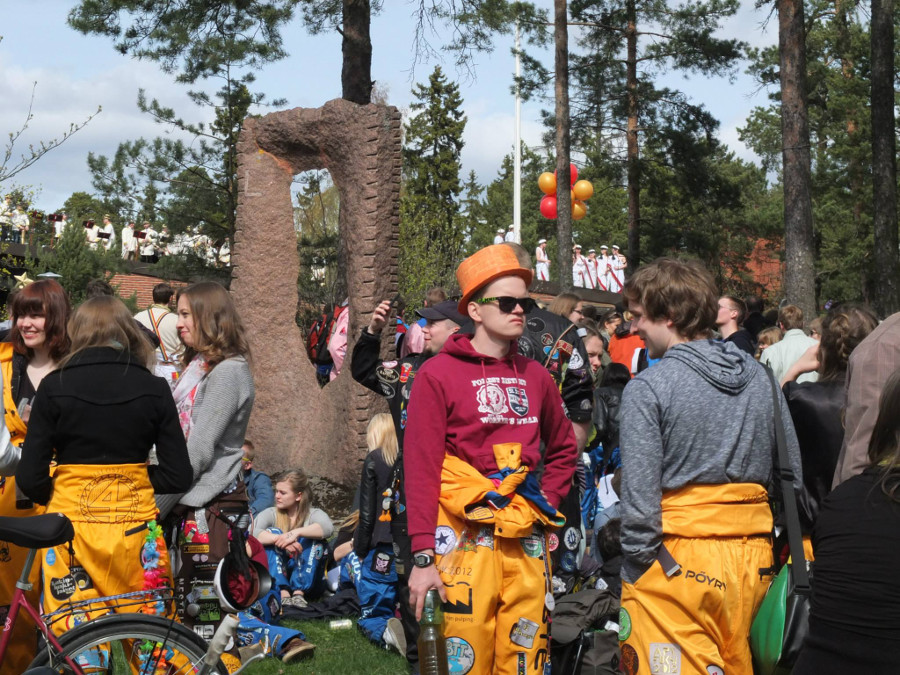 Wigs, clip-on plastic glasses hooked up to the waist, white plastic guns, balloons, streamers, and everything else that comes to mind.

Homemade mead, alcohol content of less than 1 %, slightly sparkling, tastes a bit like fermented soda. There are poorer versions, where honey is replaced by sugar, and commercial versions available in stores.

Deep fried pancake batter, sprinkled with icing sugar. Ready batter is squeezed into hot oil from a plastic bag with its corner cut or with a special device – so it looks like a thick, twisted pasta.

A special version of donuts: smaller, spiced and without filling.

This website uses cookies to improve your experience while you navigate through the website. Out of these, the cookies that are categorized as necessary are stored on your browser as they are essential for the working of basic functionalities of the website. We also use third-party cookies that help us analyze and understand how you use this website. These cookies will be stored in your browser only with your consent. You also have the option to opt-out of these cookies. But opting out of some of these cookies may affect your browsing experience.
Necessary Always Enabled

Any cookies that may not be particularly necessary for the website to function and is used specifically to collect user personal data via analytics, ads, other embedded contents are termed as non-necessary cookies. It is mandatory to procure user consent prior to running these cookies on your website.