We went to Kanagawa prefecture by train from Yokohama. The Kanagawa prefecture offers a lot of rich historical sites and charming places. In addition to Hakone and Odawara, it is worth seeing at least Kamakura and Enoshima (I will also write about them in the future).

We reached Odawara quickly and efficiently – in accordance with the Japanese railway’s standard. From the station to the castle we had to go by foot a bit. Part of the road led up the hill, which, after taking the heat into consideration, I was not fond of. Next to the road near the castle worked archaeologists. I do not know what exactly they were discovering there, but it was quite large.

Around the castle there was a large garden, moat with lotuses, a few buildings that were stylized to look like old American ones (reminiscent of those from Westerns). In one of the gardens a monkey cage can be found. The poor animals were clearly tired due to the heat. Though I do not like museums, we decided to enter the interior of the castle – it was worth it! 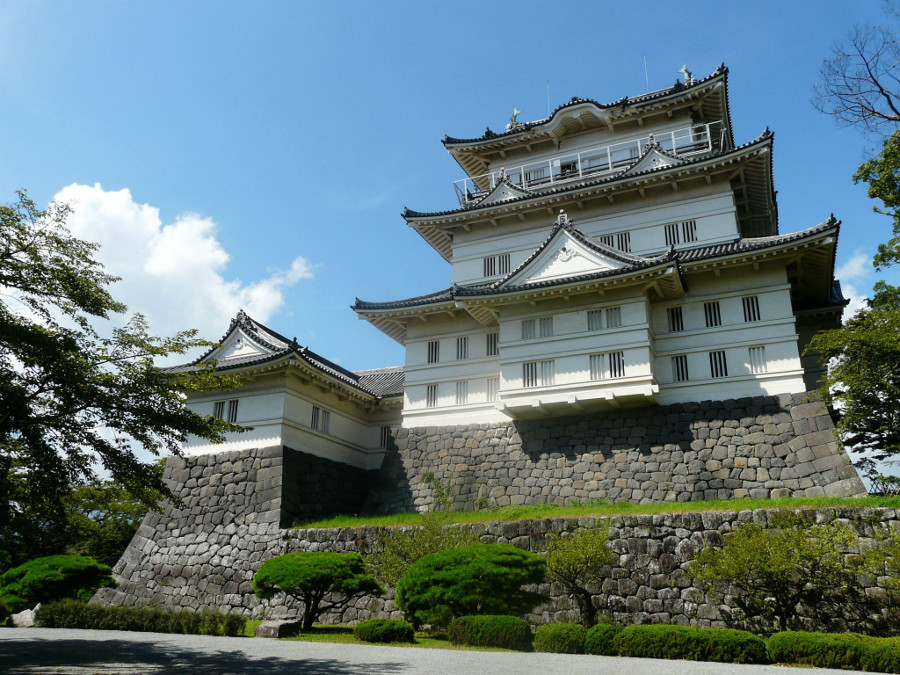 The castle in all its glory

The castle consisted of several floors. On each of them were different props – armor, weapons, everyday objects, clothes, jewelry. Also, on each floor a sign indicating the prohibition of photographing was placed. The rule was enforced with the help of a guard – one on each floor. As foreigners holding a large camera we were closely watched, and even once cautioned (preventively). But clever Japanese were snapping photos with mobile phones when the guard did not watch, which was fine 😉 From the very top of the castle there is a beautiful view of the entire city. 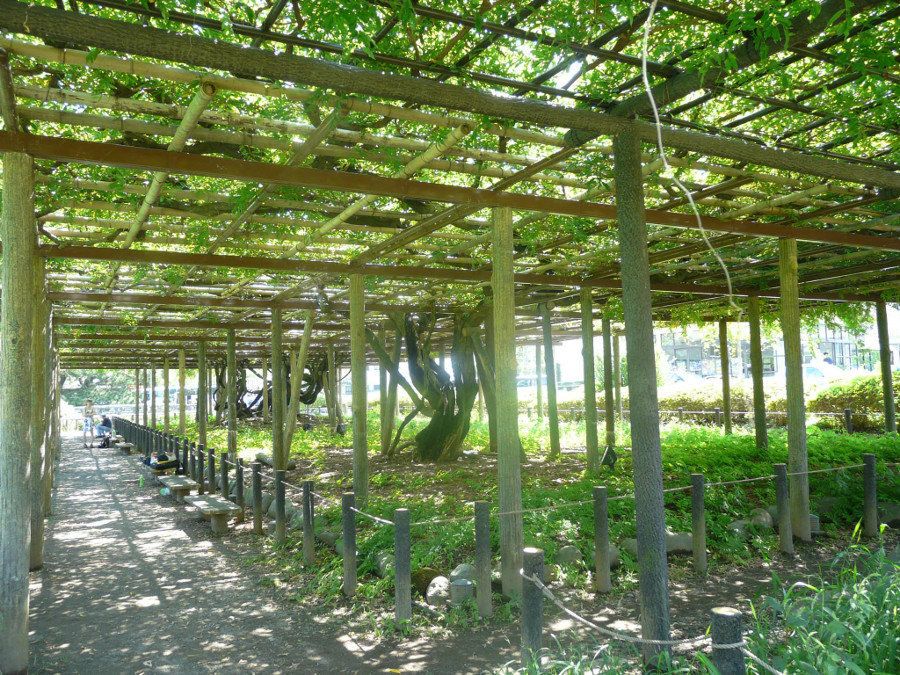 A piece of the garden

Walks only as a last resort

Hakone (more specifically the National Park Fuji-Hakone-Izu) we travelled by an ordinary train. After that we got in the red wagon of the mountain railway’s Hakone-Tozan line, which took us up the mountain. The ride was very interesting and pleasant thanks to ramp steeps, narrow tunnels, bridges, and dense vegetation. It is the only mountain railway in Japan. Every year in June it’s track is beautifully decorated with blooming hydrangeas. After the train Hakone-Tozan, we got on the cable car, from which we could watch pleasing views of the mountains.

The National Park is still volcanically active. For this reason, many onsens were opened at this area. It is said that the waters of those onsens have some medicinal properties. Onsens are popular in Japan. Those are public baths, and can be found almost anywhere. The Japanese use them primarily for relaxation. Before one can make use of a hot spring, one should clean their body. In Onsens are placed special instructions for gaijins to not commit an error entering the hot spring while still being dirty – is very important. The body should be soaped firs, then rinsed. Onsens are usually not co-ed – ladies and gentlemen have separate hot springs. 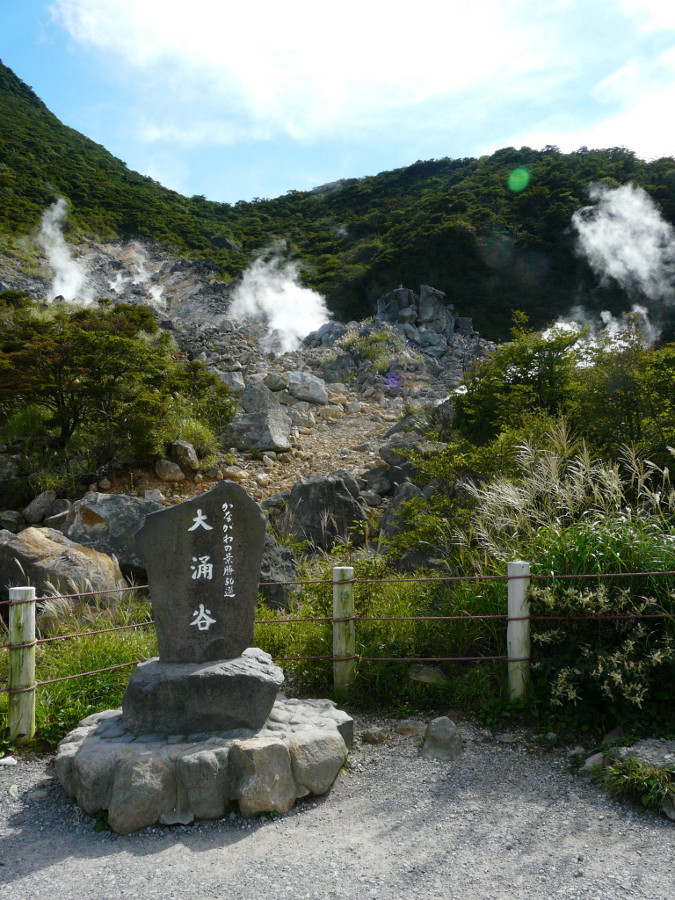 The hot volcanic springs are also used in the kitchen. These waters are rich in sulfur – the Japanese decided to boil eggs in these waters. The egg shells, by being boiled in sulfur water, become black. The taste of the eggs seems to be sweeter (at least in my opinion). It is believed that the consumption of one egg prolongs the life by seven years. The eggs are prepared in such large quantities that they have to be transported to the hot spring in boxes by big cable car designed just for this purpose. Cooked eggs can be tried in Ōwakudani, which is located near the cable car. In addition, one can purchase ice cream in some unusual flavors (black vanilla, wasabi, egg) or black bread with delicious stuffing. 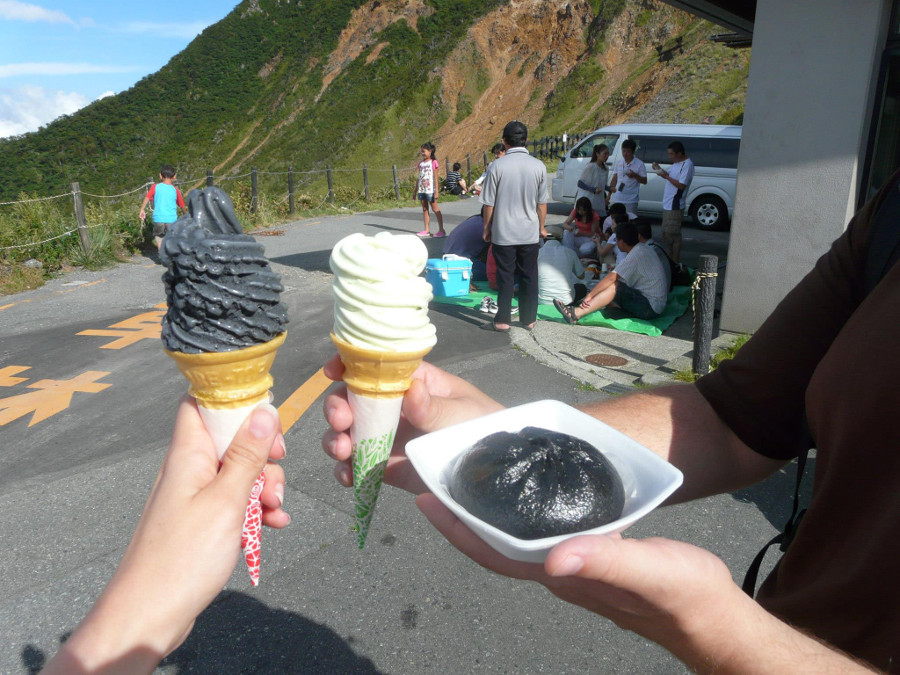 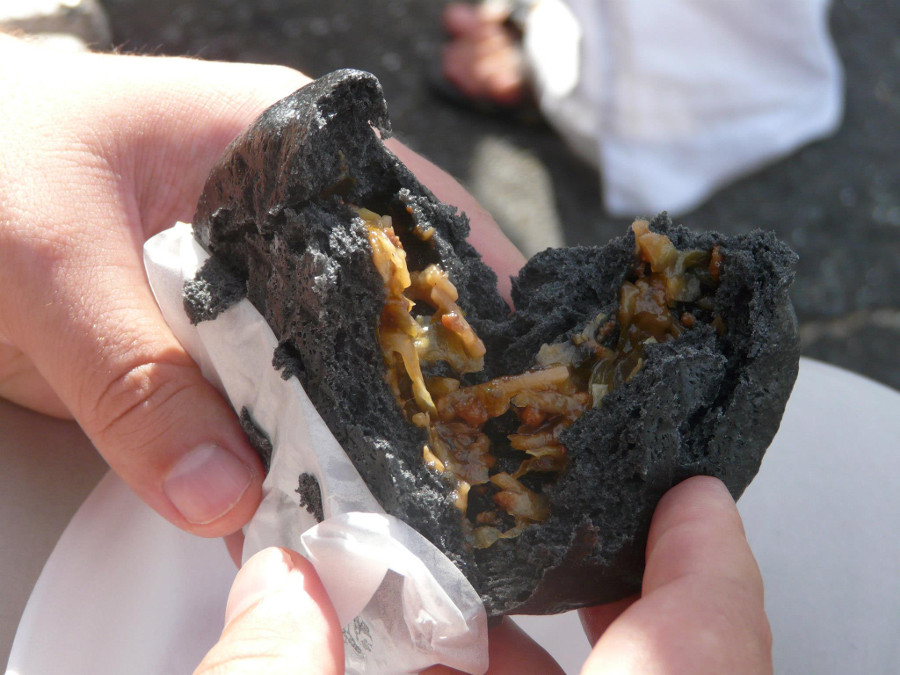 The mentioned piece of stuffing, and ice cream

Ōwakudani is teeming with tourists. They arrive there by train, car or bus – to this point leads a well maintained asphalt road. If one did not take into account the Japanese (who are representing here the biggest tourist group) the easiest nation to meet here are the Russians. Recognizing them is very easy:

Everything is bolshoye. Japanese people typically use small compacts, although the majority of Japanese women wear shoes with high heels and wedges, too 😉

Once we had enough of the presence of other tourists, we set out in search of the trail marked on the map as a natural trail. To reach it we had to pass a piece of asphalt road first. Then we discovered that there are major traffic jams leading to Ōwakudani. We have become a tourist attraction for those who could not imagine their trips to be other than by car. We finally found the entrance leading to the trail. We had to enter it through the trees. At the same time when we were wandering into the woods, behind our backs a bus stopped. The driver called Jakub – it was a surprise for both us and the passengers. 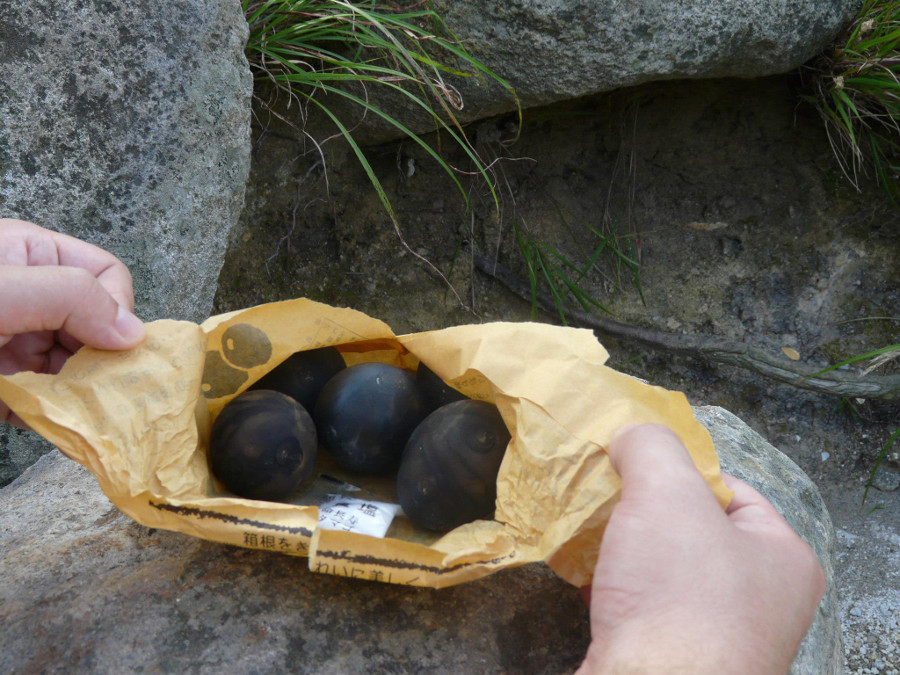 Do not be misled by my face – the eggs were delicious 😉

Although the Japanese driver did not speak English, he was trying to pass his message to us using sweeping, eloquent gestures, and sounds, which were the imitation of… snake hiss. That’s how we were warned of snakes. In the meantime, the bus has created even a bigger traffic jam. We thanked, and went into the kingdom of nature. The guide did not mention the snakes, but due to the warning we decided to be cautious. We Did not wandered off the main trail to check the side paths (which, as it turned out, were places for bird watching). We looked under our feet before making a step to not accidentally step on a snake (while there were no snakes in Hakone, but we learned about it only after our return). All in the name of the Japanese super- care! 🙂

When we walked at a leisurely pace, we encountered a warning sign informing of boars (why not snakes?). Moreover, we found a fountain with drinking water (cities are full of those, but we did not expect to find one near the trail). We were used as the most exciting element of the view for group of young Japanese people going over us by cable car – after all, who would be stupid enough to use the natural trail when one can benefit from the cable car? Only a gaijini! 😉 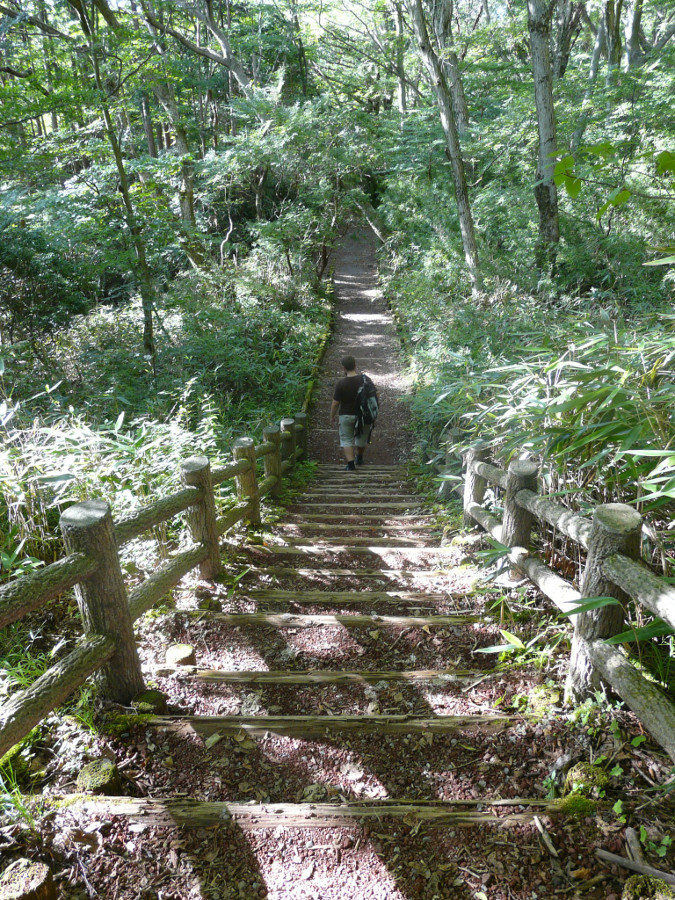 At the end of the trail was a small harbor where boats entraining passengers to the other side of the lake floated. We bought tickets and boarded the first of them. We left, and about an hour later the ship moored in a small town. We checked the bus schedule – we had to wait for over an hour for the next one, so we decided to look around, visit the nearby temples, and take a closer look on tori gate in the water. 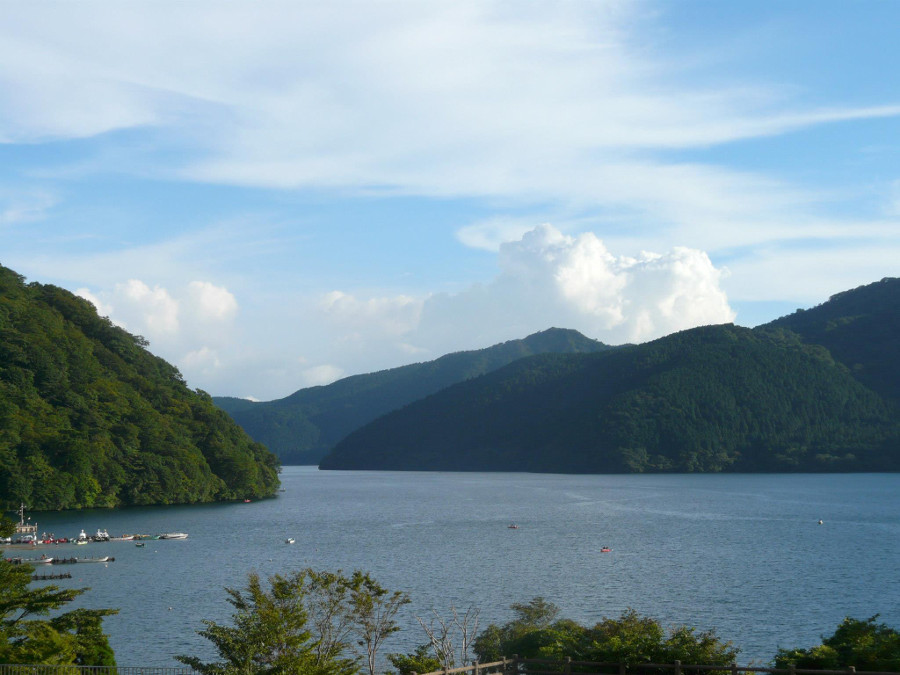 On the way to the temple we passed through a beautiful red bridge. Slightly under it two Japanese took pictures, and became clearly glad that we got on the bridge. They began to quickly snap photos, and asked us to be their models for a bit, but I panicked and ran away. A little further, at the tori gate, we met again. In return for our posing we were gifted a photo of us together with the tori in the background – and how can you not like the Japanese? 🙂

Everything would have been fine, if I knew how to use it… 😉

After sightseeing, we went to the bus stop, and returned tired to Yokohama. From many places in Hakone one can watch Fuji – the highest mountain in Japan. And even though I really wanted to reach its peak, I haven’t had the chance. However, my husband did it with his colleagues. I will give you the details in the next week! 🙂 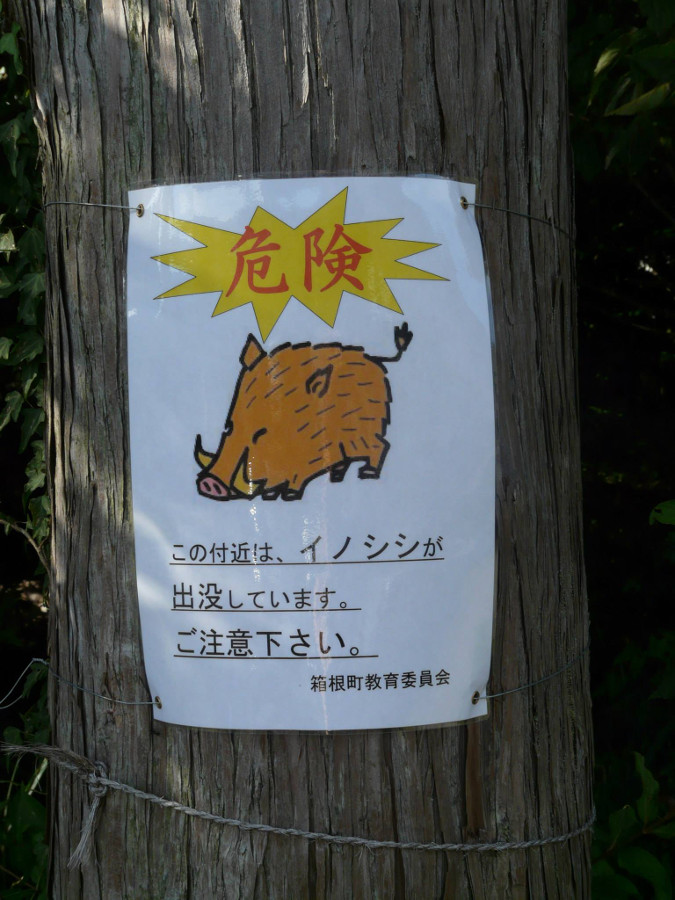 Beware of the cute boar! 🙂

One Reply to “The Odawara Castle, and dangerous routes of Hakone”