During my walks in Tokyo or Yokohama I witnessed many manifestations of love given by the Japanese to animals. I saw a stray cat in a park in the center of Tokyo, which was caressed by a group of young people. The cat did not fear them – it stoically allowed them to caress its fur. I was honored to do so too. Its fur was thick and soft. In one of the side streets of Yokohama I was surprised to see an older man feeding a stray cat. The cat also allowed the man to stroke it. Meanwhile, most of the stray cats in Europe is not as trusting. 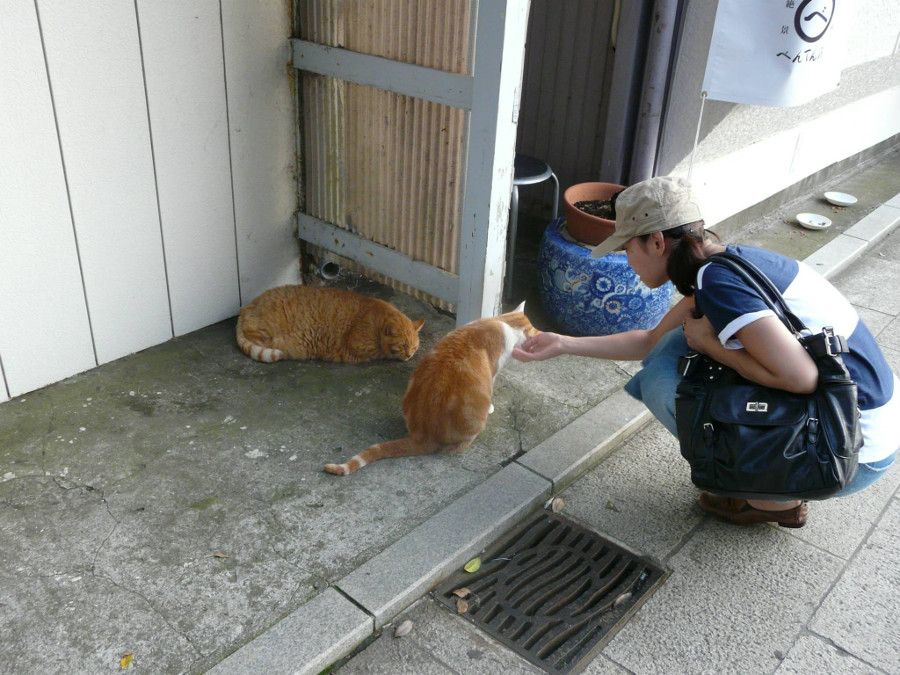 Cats in Japan are not afraid of strangers… 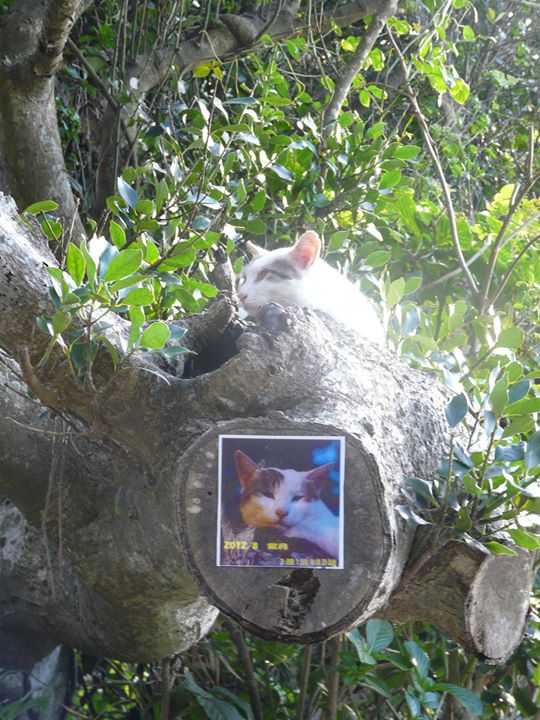 …and this one has even its “own branch” 🙂

Almost every small Japanese dreams of having a pet at home

Unfortunately, because of the size of Japanese homes, only a few lucky people are able to afford this luxury. But this is not a big problem at all, since in the summer the air in Japan is full of cicadas and dragonflies. Children catch them to small cages/boxes, and keep them at home. Adults understand this need, and sometimes even help their children at catching the bugs. The adult cicada’s lifespan very short: it dies within 4 – 7 weeks. However, it is very noisy. But what loving parents wouldn’t do for their children? 😉

Singing cicadas – at some point one will cease to pay attention to it, but after returning home I somehow missed this noise… 🙂

Cicadas usually spend their lives on trees on which they feed and look for partners. On the contrary, dragonflies rarely sit on the plants for longer than a few seconds. It is mainly connected with the overwhelming heat of Japanese summer – even butterflies are difficult to capture in a photograph. Despite this, children know how to catch the dragonfly: they need one hair and two small pebbles. Pebbles are tied to each end of the hair. When it is done, the weapon made of pebbles and hair is thrown in the air. Dragonflies often confuse pebbles with a potential pray, thus become entangled in the hair, and, because of the weight of the stones, fall to the ground. 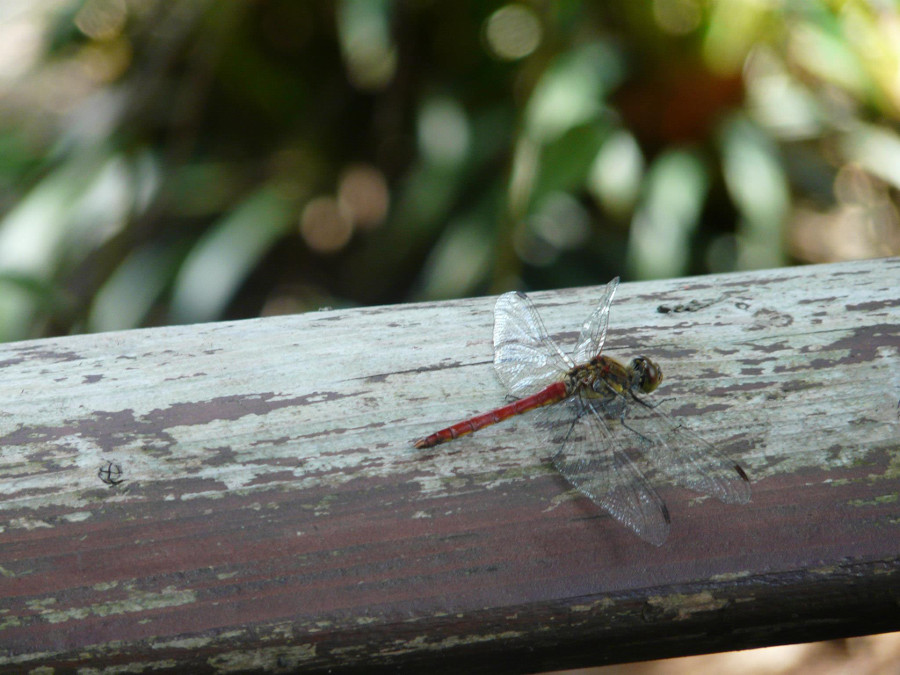 The precious moment when the dragonfly rests

Dragonflies in Japan also have their special place in the culture. When I walked towards Enoshima at a pedestrian crossing a car hit quite a big dragonfly. At that moment just next to me stood two older Japanese: a woman and a man. The woman looked moved by the event to the extent that she covered her mouth in a gesture of shock and sadness. The man, though he did not show his feelings too much, also looked sad. They were looking at the dead dragonfly before they went on. At that time I still did not understand why this event moved them so much. Maybe it was a bad omen? Today I know that the dragonfly is a symbol strongly associated with the Japanese samurai. That it symbolizes victory in battle, strength, courage, and bravery, as well as happiness or a successful harvest. It is present in the literature. According to Japanese mythology, Emperor Jimmu Tenno was bitten by a mosquito one day. As soon as the mosquito flew away, it was attacked by a dragonfly. This event so inspired the Emperor, that he gave Japan the name of Akitsushima or “Dragonfly Islands”. 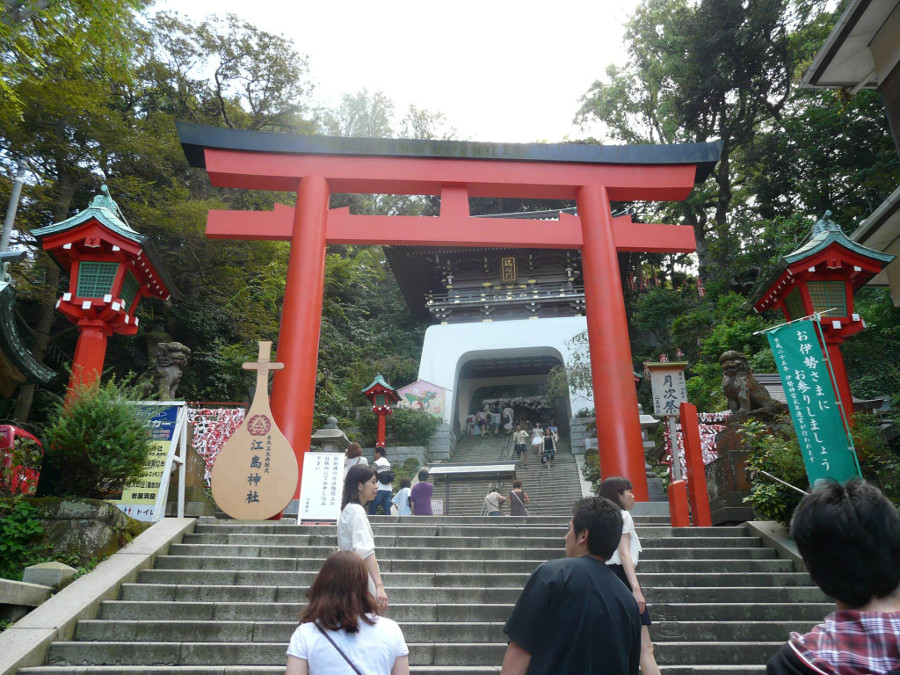 Enoshima is a mountainous island, so expect a lot of stairs

Enoshima is not very far from Kamakura. To the island leads a long, stylish bridge. To my surprise, the lamps illuminating it were occupied not only by seagulls, but also by hawks that feed on fish. The island is supposedly a home to many owls, but when visiting it in the middle of the day I was not able to confirm this information. Fortunately, one does not have to look for cats – they are everywhere, lying down even in awkward places such as rocks or stones. Some approach humans, fawn on them, demand caresses or food, but most of the island’s cats remain indifferent and somewhat distant. 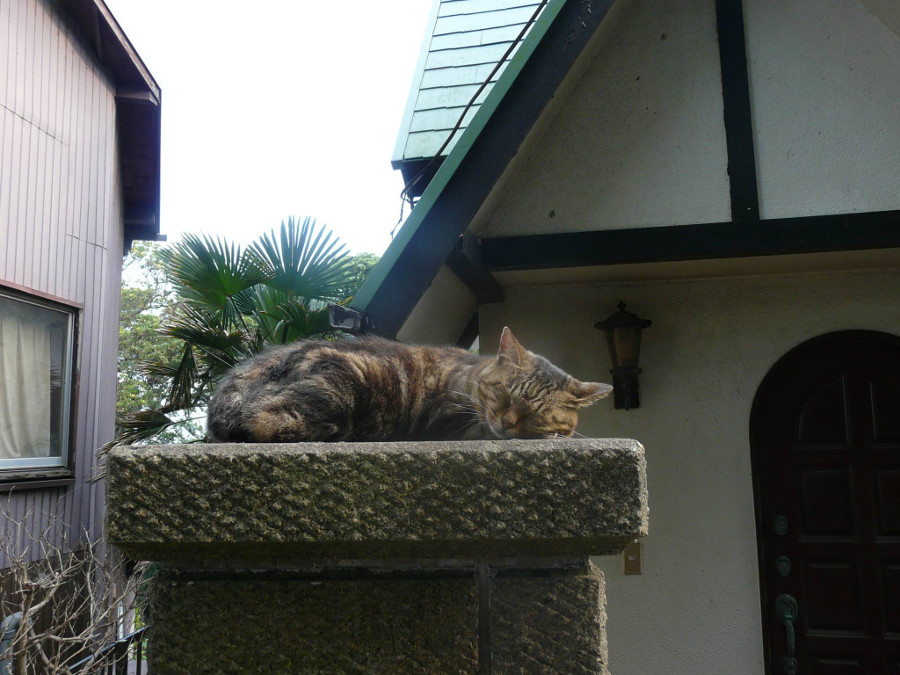 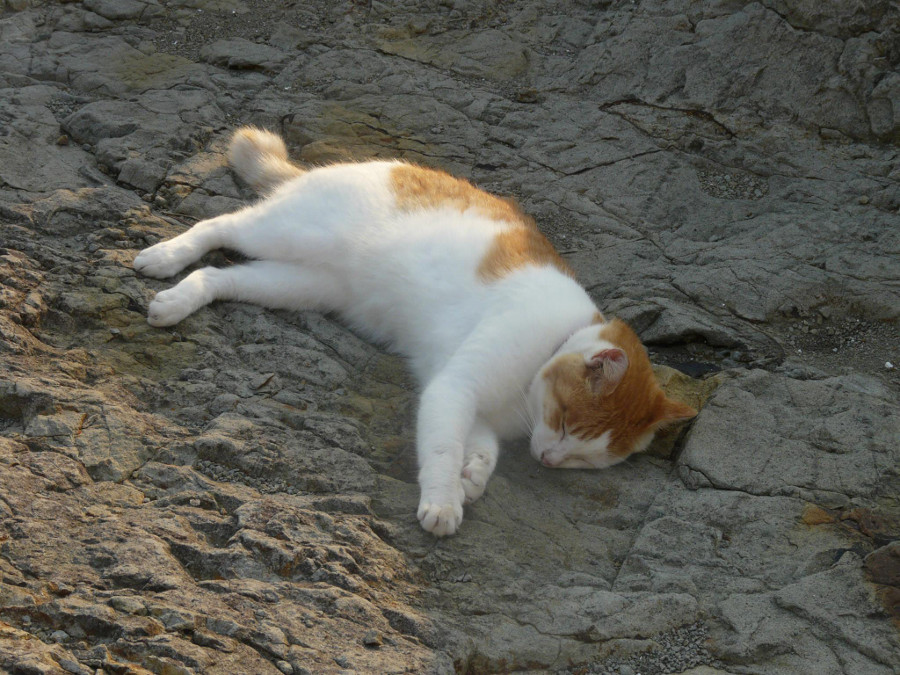 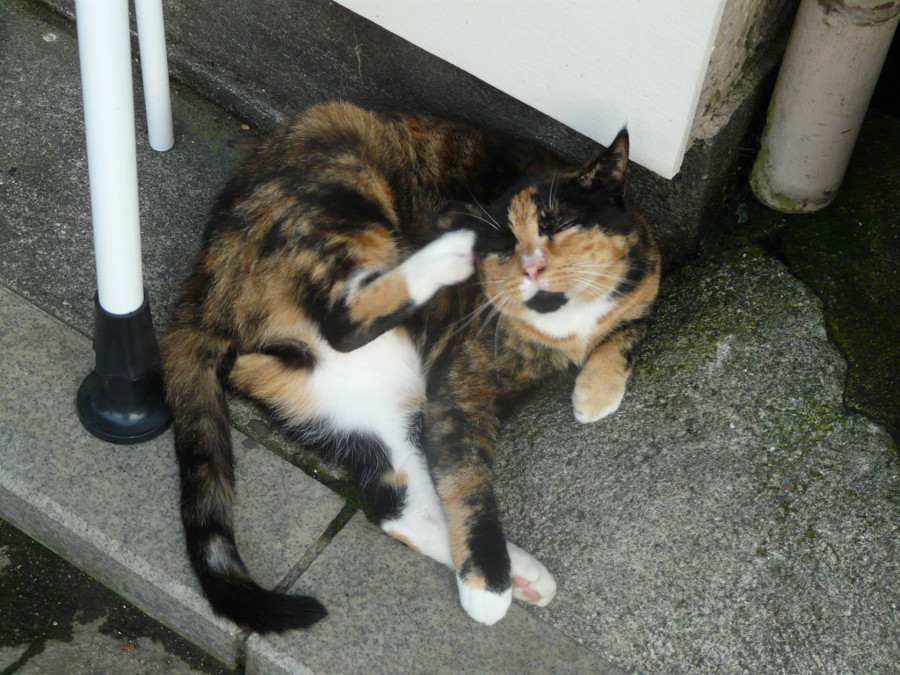 Some of the inhabitants of the “Cat Island”

In addition to cats , the island has a large temple dedicated to the goddess of fortune, prosperity, music, and knowledge Benten, and an interesting natural trail. One can spend some time in a beautiful park with a watchtower, explore caves, eat something tasty (like green tea and sweet potato ice cream), soak feet in the water, watch the anglers. 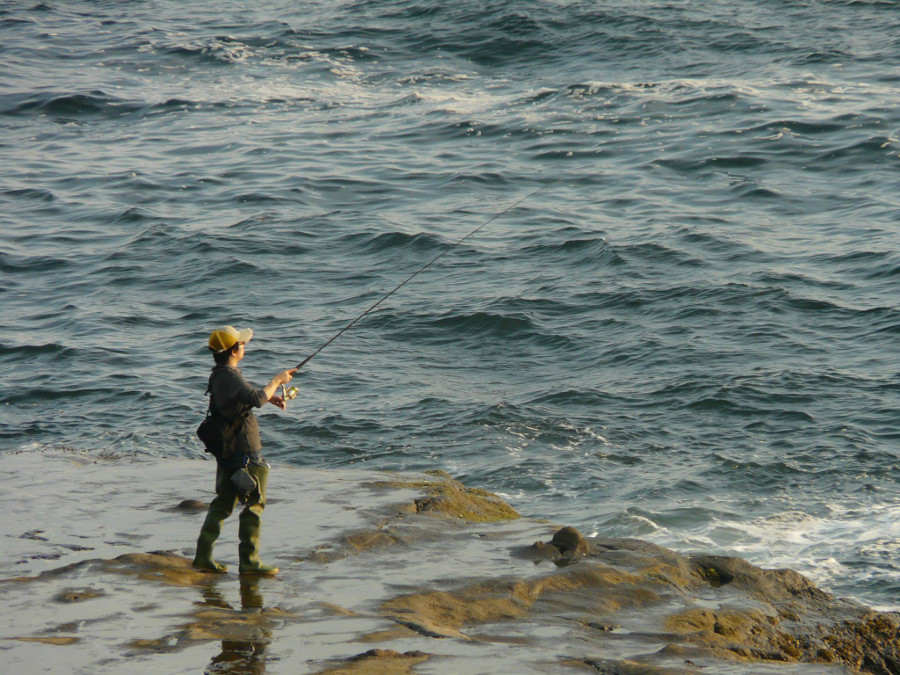 I wonder if he managed to catch something… 🙂

Near the Love Bell one can find well known in Europe love-locks attached to a fence. For those locks special places are designated, and only occasionally it happens that the lock was attached in a different place. This place is linked to the legend of the love between the goddess Benten and the sea dragon that ravaged the coast of Enoshima in his attacks of anger. To stop him from further attacks the goddess married him. Therefore, for the relationship to be successful, one should not just attach the lock to the fence – the couple should also ring the Bell together. 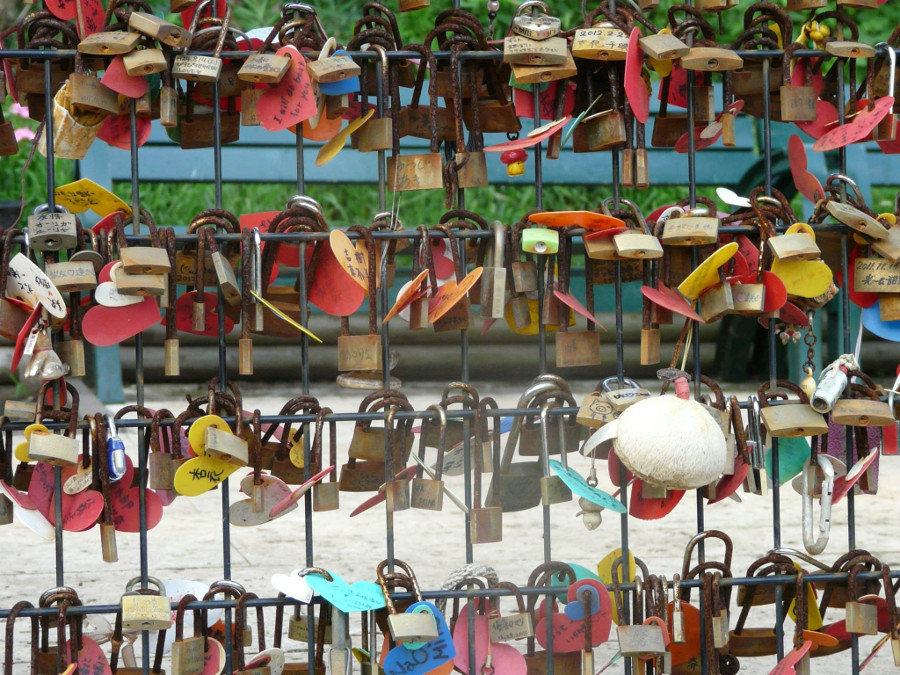 Love evidence near the Love Bell

Enoshima is a place dedicated to tourists. Hence, its narrow streets are filled with small shops with an amazing amount of souvenirs, postcards and handicraft. Prices tend to be very attractive, so if anyone would like to buy a recognizable souvenir at a reasonable price, Enoshima is the best place for looking for it. To make the best possible purchase you need to spend a little time, but it is worth it. It should also be pamper yourself with the food there such as seafood or pressed squid. 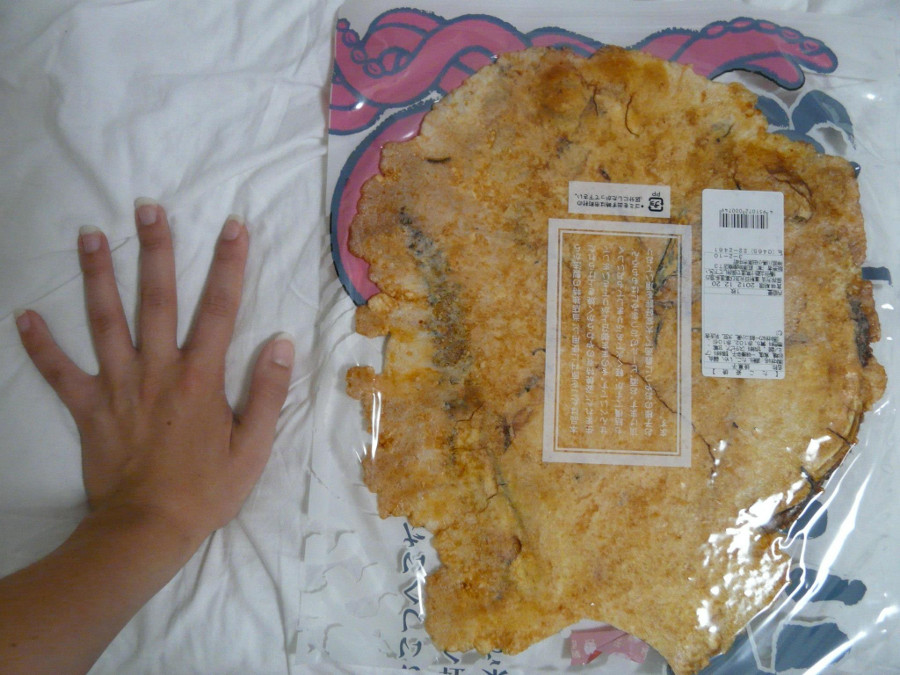 The size of the pressed squid – it was very tasty 🙂 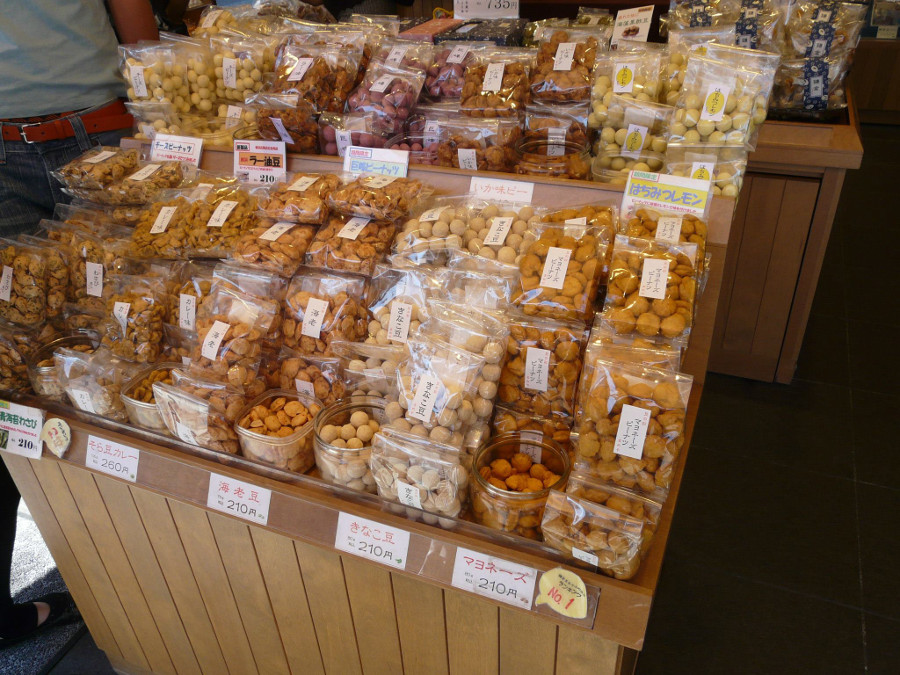 I really liked it, that I could try everything before buying it! After tasting everything from the asortiment, I was full 🙂

If you are a fan of Ghibli Studio’s movies, you will be certainly happy to visit their gadget store. It is placed outside of the island, in the city. It is dominated by toys from “My neighbor Totoro” and “Princess Mononoke”, but the other productions’ gadgets are also included. Prices – unfortunately not for my pocket, but maybe someday I will buy for myself the original pillow in the shape of Totoro 🙂 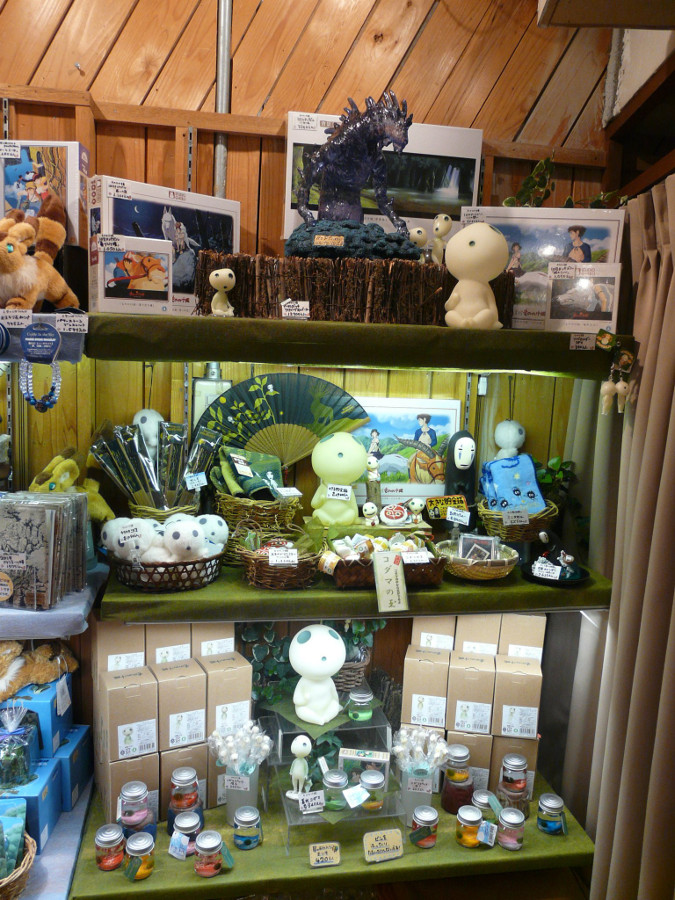 One of many shelves in the Ghibli Studio’s store

When sightseeing in Enoshima one should purchase the Enopass. It is a card for 1,000 yen, which allows access to all the attractions of the island. Additionally, it provides discounts to tourist sites located at the island and in the city (aquarium, Enoshima Spa, selected shops and restaurants).

Next week we slightly slow the pace. We will rest from sightseeing for a moment, as we will sit in the stands of Ryōgoku Kokugikan in Tokyo and cheer on the sumo wrestlers! Do not miss this event! 🙂

4 Replies to “How much do the Japanese love animals? – Enoshima”