We bought our tickets on the internet. On the day of the tournament we got up very early, and were very excited – a live sumo tournament is a real treat! The more, that only six tournaments are held every year (three in Tokyo, one in Osaka, Nagoya, and Fukuoka). We arrived at Ryōgoku Kokugikan, of course, by train. Together with the ticket purchase confirmation we went to the ticket office where we received the tickets and stamps on our right hands – thanks to those stamps we could freely leave and come back to the arena. As next, we quickly got acquainted with the assortment of the store in the arena – the prices were the same as in any other store, no additional margin. No one checked whether or not we brought something with us inside – full trust. In time, when the audience started to gather, it turned out that you can bring any food or even alcohol inside, nothing was a problem. Want to watch fighting sumo wrestlers and at the same time make a picnic with your family? That’s easy! After all, sports facilities in Japan are making money from sport, not snacks 😉 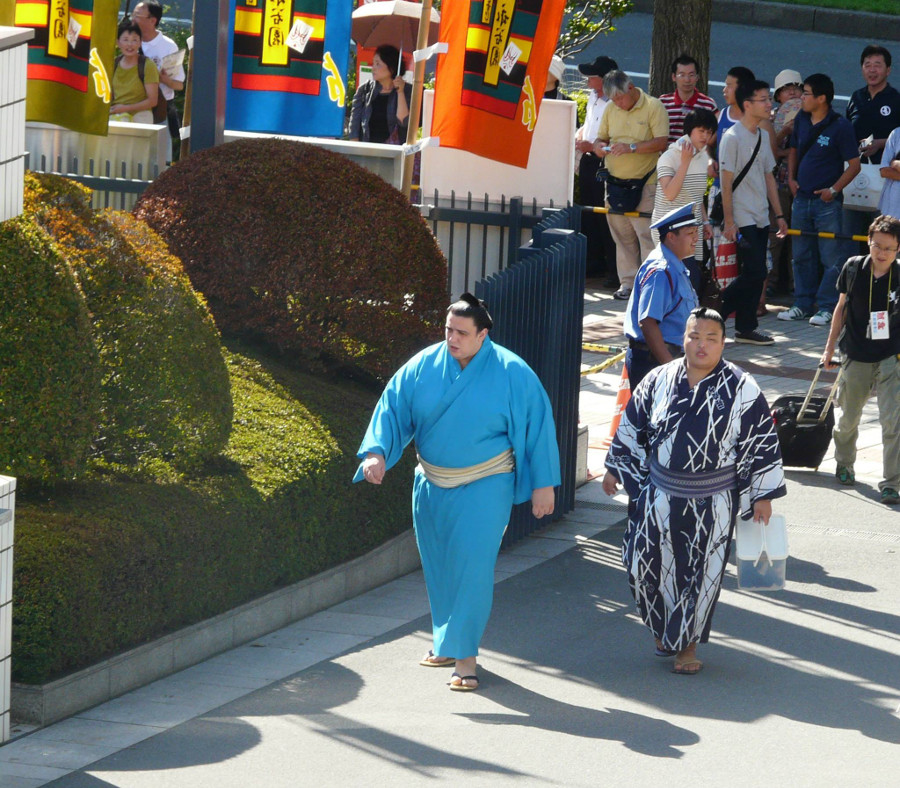 Sumo fighters outside the ring dress up in traditional Japanese kimonos. The crowd in the background is full of fans 🙂

Choose your seats with care

Arena sells as many tickets as there are seats. It offers three types of seats: normal, boxes, pillows just behind the judges backs around the dohyō (clay ring where the fights take place). Normal seats don’t differ from the European ones – those are just comfortable chairs placed at some distance from dohyō at the second floor, but at all times with good visibility. These are at the same time the cheapest ones – their prices start from 3,600 yen. 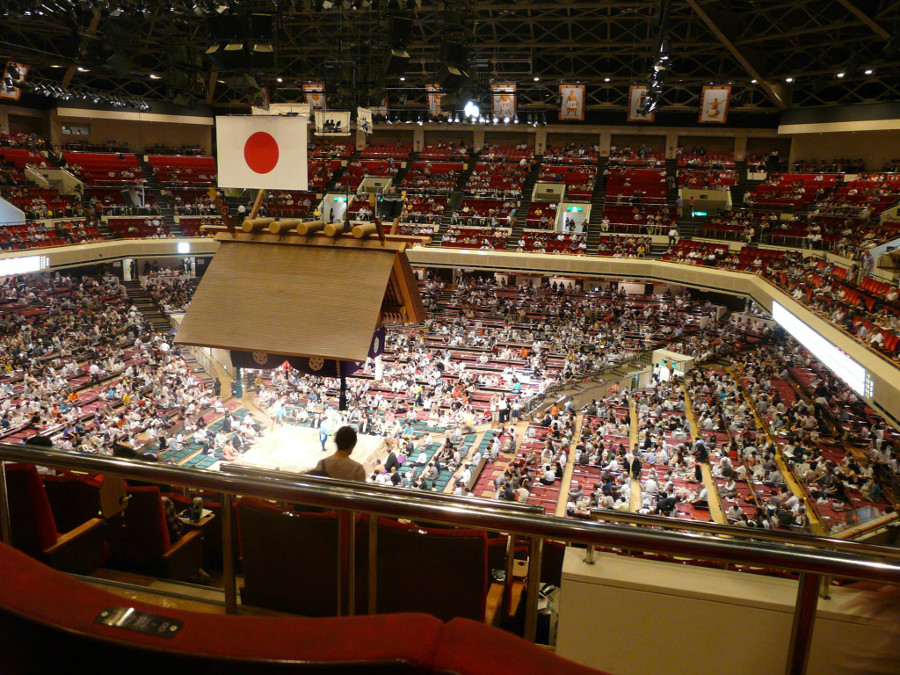 Although the word “box” with respect to the location gets easily associated with a quite large space separated from the others, this association is probably not work with the boxes of the sumo arena. These are small places, for 2 or 4 people, separated from the others by low wall. Unfortunately, for a typical European the box seat might not be the best choice, because there are no chairs, just pillows – kneeling position for a person unaccustomed to it may be uncomfortable. However, if someone decides to buy a box for 4 only for him/herself, it should be very comfortable. At the same time, such a box for 4 people may be too tight. Prices for a place in a 4-person box start at 15,000 yen, a 2-person box: 9,200 yen per place. 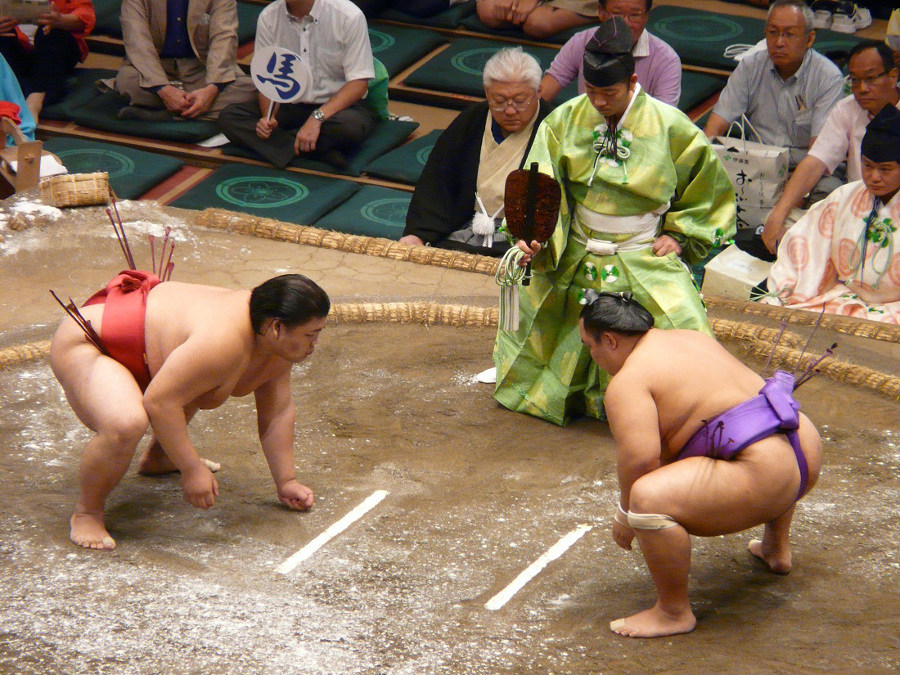 The battle between wrestlers begins when their eyes meet

Last places, those around dohyō, provide the audience with the largest dose of emotions. Not only because the sumo fighters duel is clearly visible. Mainly because you can get accidentally hit… by a falling sumo wrestler. Such situations do not happen very often – we saw them maybe three times during the whole day full of duels. Those situations are dangerous, therefore one should be vigilant and careful. Places in this sector are not sold to children under the age of 6, and the elderly people. Children can only use them when taken care of by an adult. There should not be any items in the audience that may pose a threat, like cameras or glass bottles. It is highlighted, that people buy those places at their own risk. In the event of injury first aid will be provided. However, the arena does not pay compensation. Price for a place with the possibility of meeting the wrestler face-to-face – 14,300 yen.

The sumo tradition originates from Shinto religion, and more specifically its ritual dances, which symbolized human wrestling with a god (kami). Also, the imperial court had a significant impact on the development of sumo. Every year, the court held sechi – sumo festival (festival of the Samurai), during which representatives of all the provinces were fighting among themselves. It was a celebration of world peace and good harvest. Travel expenses were paid by the fighter himself. To this day, sumo fighters pay from their pockets, for example for outfits. Fortunately, the best receive fixed, high salaries.

Diagram of the dohyō (source: Wikipedia)

Both the costumes and ritual duels remained almost unchanged up to the present day. Hanging above the ring is a roof resembling those of the Shinto temples. From the roof hang decorative tassels (fusa) symbolizing the four corners of the world. Ring itself is holy. It is made mainly of rice grass and clay, the surface is covered with sand. On its surface there are two white lines (in front of which wrestlers position themselves before the fight), and a circle made of grass. The ring is new every year – the parts of the old one are picked up by fans of the sport as souvenirs. The duel’s rules are fairly simple: the one losing is the one who first falls or is pushed beyond the circle of the ring. Hitting with fists, attacking the eyes, strangling, hair pulling, kicking in the stomach and chest disqualify a player. The same will happen to the player who starts to pull the opponent’s band covering the vital organs. On the other hand blows dealt with an open hand, shoulders, and head are in accordance with the rules. 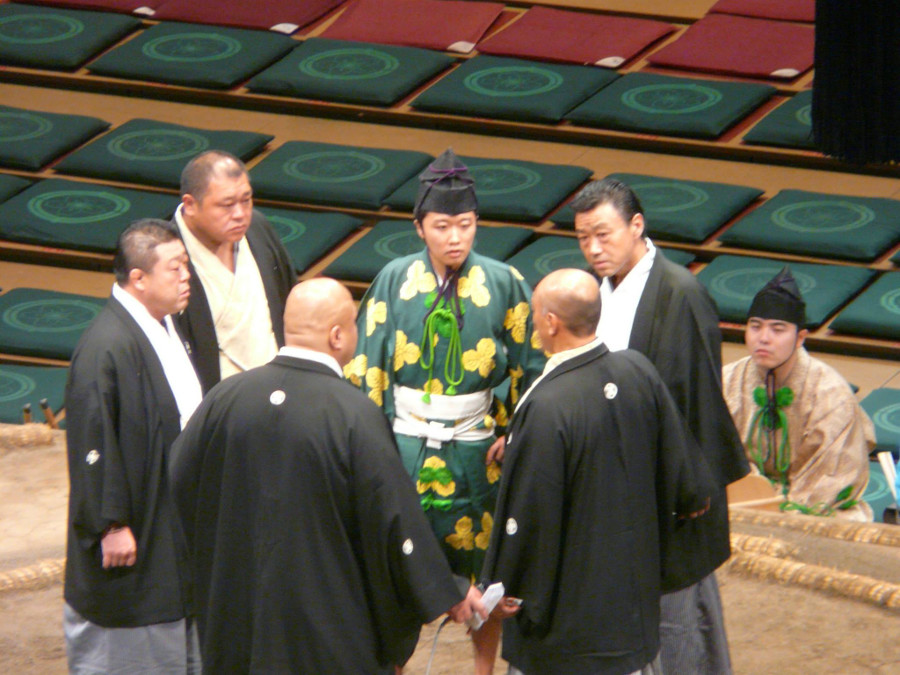 Sometimes the result of the match is not obvious – in such cases, the final decision is up to the judges

In cases of dispute, the decision of who won the duel is made by the judges watching the fight near the ring. Before the fight, each wrestler spills some salt – it is a cleansing ritual that should not be overlooked.

The fight of junior wrestlers

Contrary to the wrestlers’ appearances, sumo has no weight limits. At the same time, opponents are not determined by drawing, but by the judges, with no rigid criteria. The effect is that a warrior can stand eye to eye with an opponent who is two times heavier than him. Also, the country does not really matter – sumo tournaments in Japan take part players from Mexico, Mongolia, Hawaii, or Russia. It was funny to hear the conversation of two gambling Japanese who were sitting in front of us. When they saw one of the players they shouted enthusiastically: “Oh! Anorectico Gaijin!”. It is not hard to figure out why 🙂 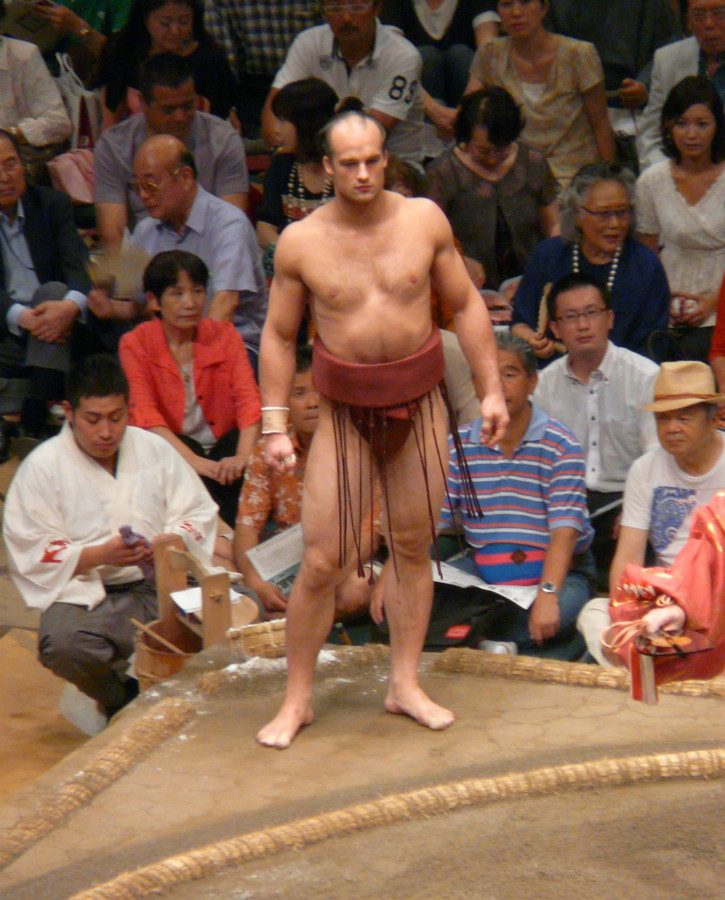 The current sumo champion is called Yokozuna. This title is for a lifetime. When judges notice that Yokozuna begins to lose his form, they suggest him to retire – the fighters generally do this to not to lose face. However, before the fighter has a chance to become Yokozuna there are years of training and the slow climb up the ranking ladder that await him. 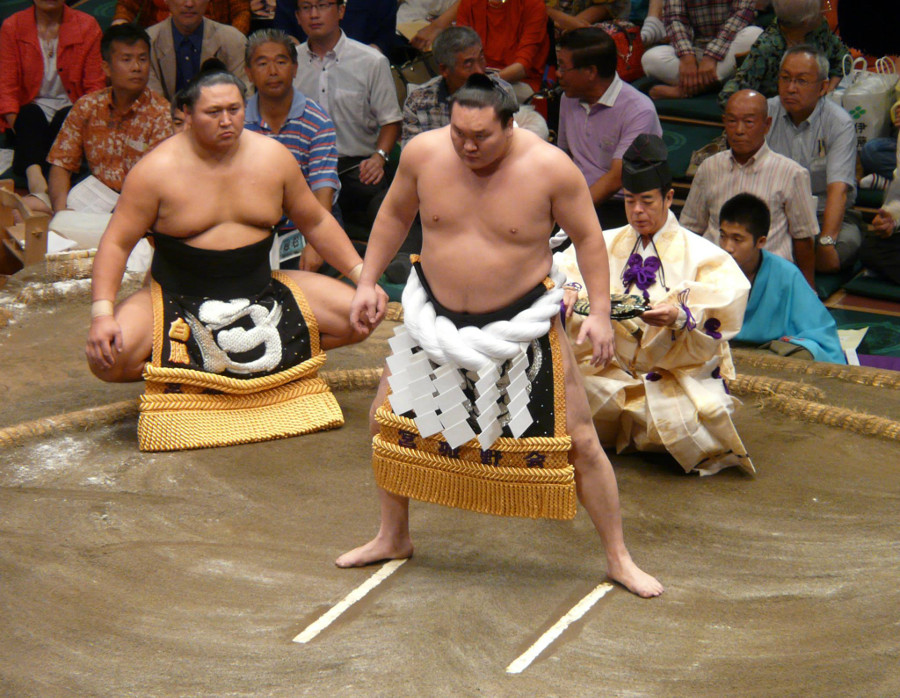 Yokozuna in the traditional costume

Young sumo warrior’s trainings are very demanding. Twice if he is the youngest in the stable. He gets up early in the morning, wakes the other warriors, and prepares breakfast for them. Moreover, he prepares other meals, does the shopping, laundry, and cleaning as part of his daily routine. For most of the day he trains with other fighters from the stable, and finds some rest in the evening. Sometimes, the young warriors are bullied by the older ones. Sometimes the bullied try to run away, but should they get caught – a severe punishment awaits them. If they decide to drop out, it is a disgrace to the stable from which they originate. And all this in order to have a chance to be Yokozuma.

A documentary on the life of sumo

Our memories of the tournament

We took our seats in the stands. We wondered why so few spectators are watching the fight. Could sumo have not been as popular as we thought? It turns out that the Japanese still have warm feelings for this great sport, but come rather at the fights of the wrestlers highest in ranks. Although the first fight for us was as interesting as the fight against more experienced wrestlers, the arrival of more spectators strongly enriched the atmosphere. The Japanese really lively react to the situation in the ring, cheer loudly on their favorites by shouting their names… You just have to experience this for yourself! 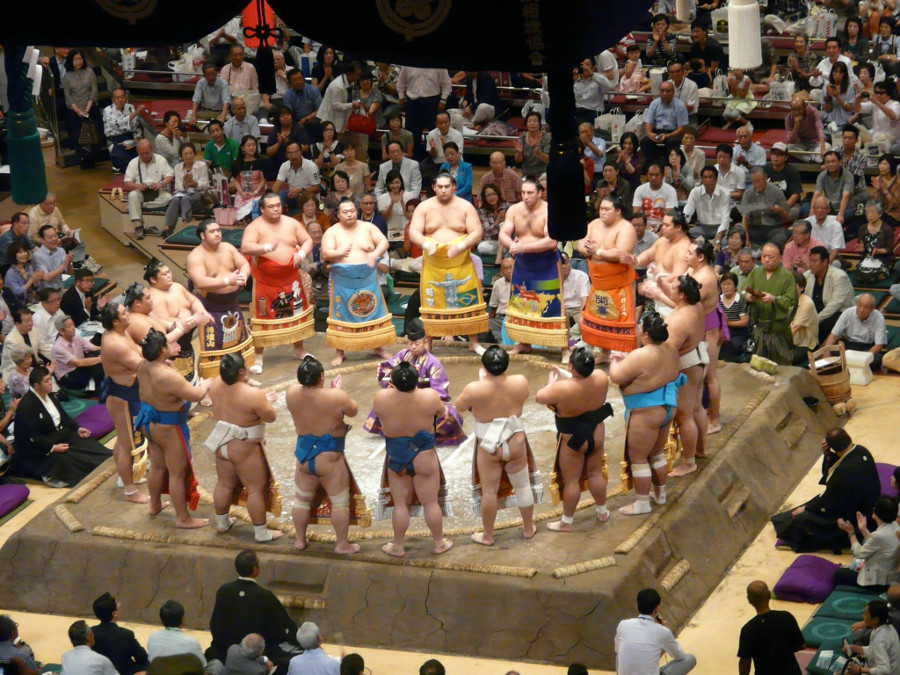 The fights of the warriors with the highest ranks begin with the official, traditional ceremony, where all the wrestlers and the current Yokozuna present themselves. During the ceremony they all rise up their hands (to show that they have no weapons) and clap them once (to draw attention of the gods). In addition, Yokozuna stomps loudly at the dohyō to expel all evil from it. This characteristic pattern is repeated by all the warriors before each duel. The same happens with the purification with salt and rinsing mouths with water. The duel begins when the warriors crouch in front each other and lay both their fists on the surface of the dohyō. Such a preparation for battle can take up to 4 minutes. During this time the warriors may repeatedly use salt and water to the delight of the audience, which becomes more and more impatient and emotional.

We have seen several dangerous situations, resulting in sumo fighters getting injured. One of them fell so awkwardly that the medics had to transport him on a wheelchair because walking caused him too much pain. During their trainings warriors also have to practice how to fall safely. In addition, special hairdo protect the sumo’s head from injuries. Nevertheless, it is a contact sport, and sometimes it is virtually impossible to avoid an accident. It is the iron discipline and the possibility of danger that discourage young Japanese from choosing the path of a sumo warrior. 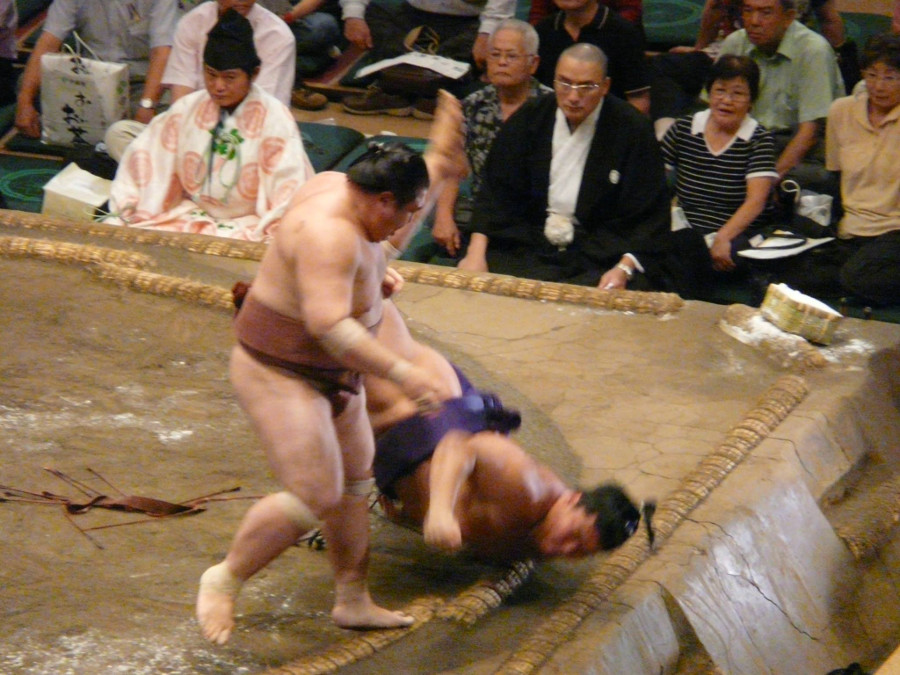 At the beginning I was a little worried that the fight might be boring for me. To my surprise, I was having great time, and each fight was interesting. If I had the opportunity to sit in the audience for the second time, I would do it for sure. In addition, after the tournament we went to the local restaurant, where we had a typical meal for a sumo wrestler, but in a smaller size – the chunko soup. It is a soup rich in protein with various pieces of meat (chicken, beef, fish), vegetables, and sometimes tofu. I really liked its taste, though a bowl of this soup certainly was too much for me. I recommend this soup to anyone who would like to feel like a wrestler at least for a moment 😉

In the next post I’ll talk not just about about food, beverages, and alcohol… More specifically – I will invite you to eat and party with the Japanese! 🙂

2 Replies to “The bitter-sweet life of a sumo warrior”