On the third day of our trip we got up at dawn, at around 5AM. The jet-lag had its contribution to this. It worked better than any alarm clock. We got up from the bed quickly, refreshed ourselves, and set off to explore the city without any breakfast at all. This stroll proved to be a great idea, because the sidewalks were almost empty, but piled up bags of garbage patiently awaiting the arrival of the City Services. Also, the traffic was reduced to zero. Only the police were at their posts or near them, if there was a stall with donuts nearby. Yes, this legendary picture of a policeman with a doughnut in hand is possible to spot around 6AM 🙂 Also, it is the best to visit the Brooklyn Bridge at this time, because there is no living soul on it. At peak times to see it, one has to stand in line and go through hordes of tourists! 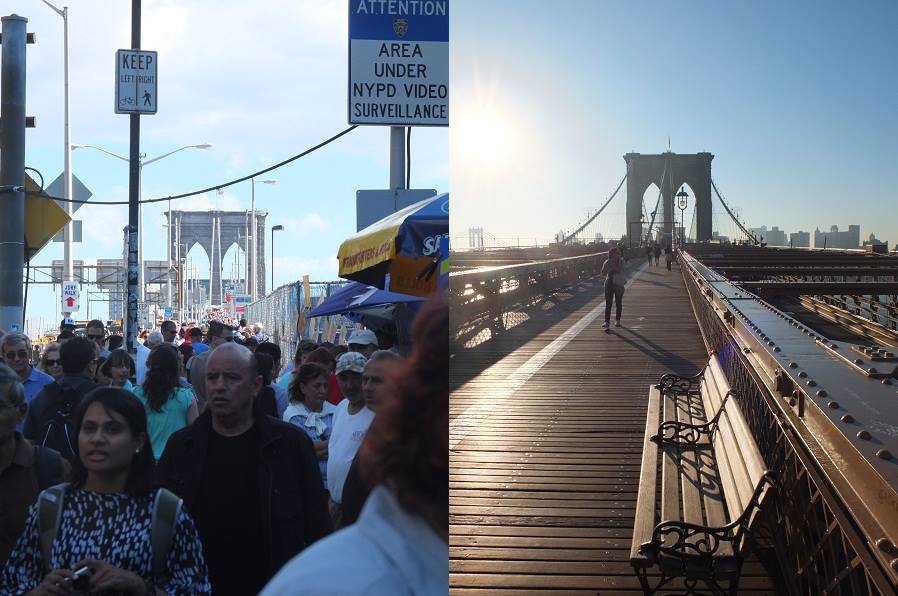 Consider it whether you want to go through the hordes of tourists, or want to quietly admire the view of the bridge in the morning 😉

If someone encounters a vagabond at dawn, they should be sure that something interesting is going to happen or at least worthy of taking a note. The first one we met smelled of weed, but not this species of weed which grows in regular gardens. In his hands he held an information written on a large piece of cardboard: “I am looking for a companion to smoke herbs with“. He waved to us and smiled broadly, but we were forced to refuse 😉 The second vagabond was not so upbeat. He began to speak to our backs with a tone of a skilled politician: “Do you have anything against hobos?! I’m the boss here! Bugger off! Misery is my lord!“. In my opinion, it would be beneficial for both of those men to go to a party together 😉

At 6 in the morning the city is full of many different scents: it smells a little of marijuana, of some donuts, of bacon, of the aroma of coffee in cafes around. Young people run out into the streets for a morning jog or exercise in gyms behind big glass windows under the supervision of private trainers or fitness instructors. Healthy lifestyle here is very promoted and popular, especially among young, active people doing career. We saw obese people very rarely. The reason is simple. I was told about it once by James, a resident of the United States, whom I met in the hostel in Lodz. He put it like this:

– Most of young Poles I met think, that if you come to the United States the streets will be full of fat people. It is hardly surprising, since your media constantly reminds you that Americans are among the fattest nations in the world. Know, however, that the corpulence is primarily the domain of the lower social class, because our fast food is ridiculously cheap. Because of these prices, mostly poor people eat there. 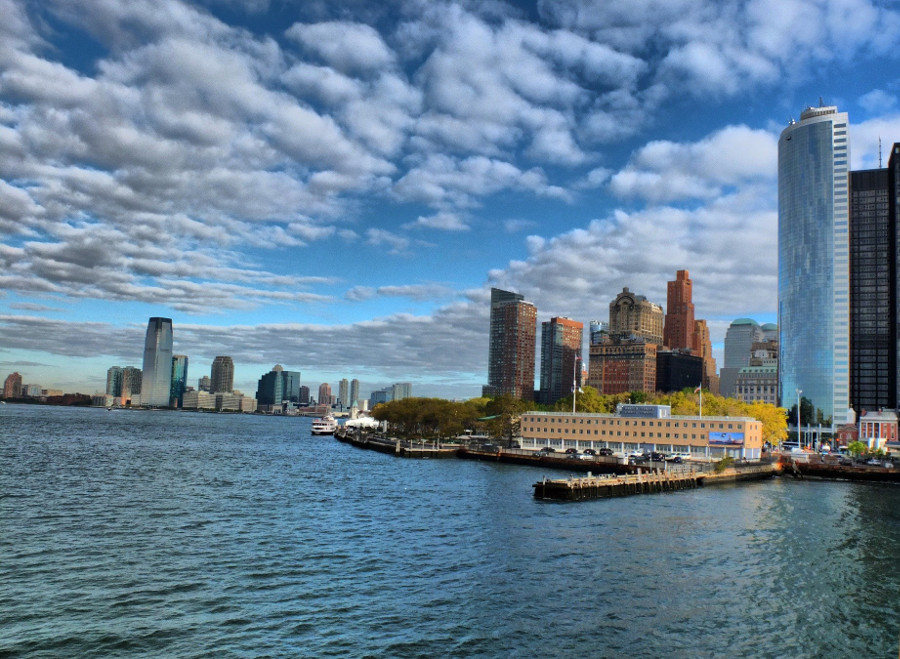 Looking for New York, where the prices of flats and rentals in good locations are exorbitantly high, James was right – in districts such as Manhattan live the wealthy. Employees of corporations, managers, specialists. Appearance counts, is part of the struggle for survival in the urban jungle, so no one spares money for that.

That day we planned to do some shopping in order to get some missing equipment. But before stores were opened (9.00) we wandered along Wall Street and went on a trip by ferry toward Staten Island. We admired the city and Statue of Liberty from a distance – I recommend trying it, the views from the deck are beautiful. In addition, the ferry is free. When we returned to the vicinity of Wall Street, the sidewalks and streets started to get crowded. Newsboys began handing out free daily newspapers. On the way we stopped at the doughnut stall and bought one. I expected something special, something new, some “wow” – unfortunately, the donuts were had the same taste and texture as those available in Poland 😉 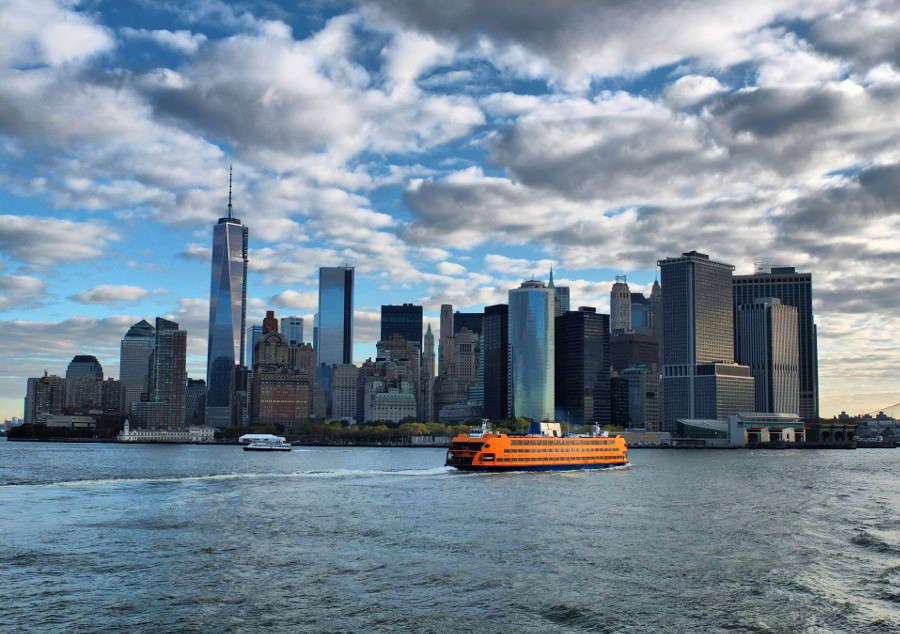 We planned to buy jeans and guidebooks. We were just close to one of the popular denim-selling shops. The level of service exceeded our expectations. There were more assistants than in Polish stores of this type. They were waiting near the dressing room until the customer tries the pants to you give them a different size, color or model, if necessary. Moreover, they were very polite and extremely open. One of them came from Israel and worked at the store to pay for her second year in college. As you probably know, education above high school level is not free in United States. Of course, a person can always allow their child to attend a private school: primary, secondary or high school. Public universities, colleges and professional schools are cheaper than private. US helps pupils and students by offering them scholarships, loans, grants, and other forms of financing. Nevertheless, they do not always cover all costs associated with education. Hence, many young people are forced to take a job – as in Poland.

Unfortunately, not all my experiences with the American hyper-active and hyper-caring service were equally nice for me. In a large shoe store I had to compete to get the service’s attention, as they were moving faster than ants in an anthill. It was hilarious to chase the shop assistants having one shoe on through the shop 😉 It was lovely, however, that they remember the names of clients they assisted. 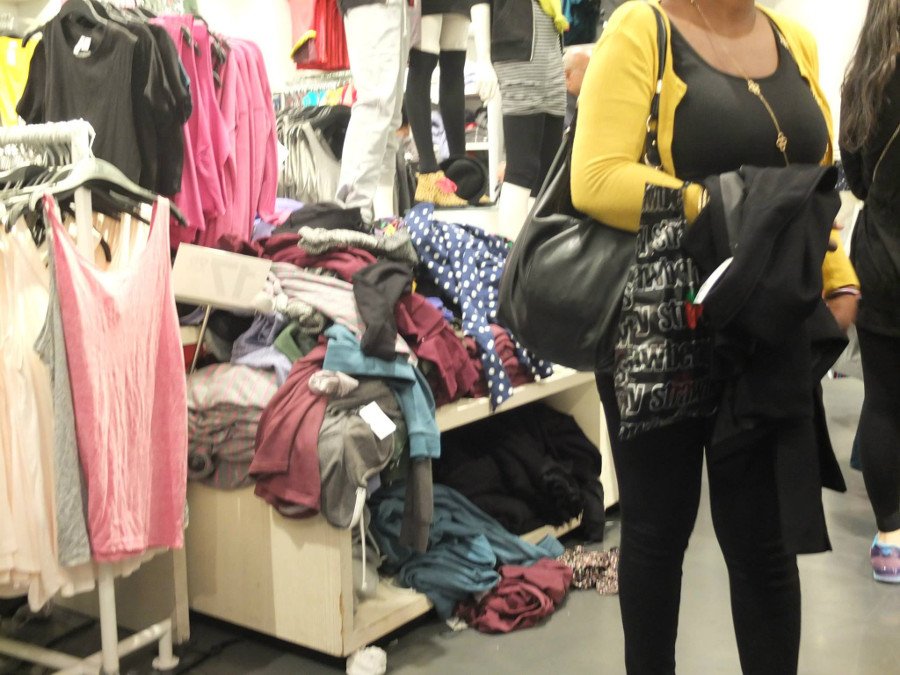 Crazy customers do not care about the order, and employees sometimes are unable to keep up with the cleaning… 🙁

At the end of our shopping trip we visited H&M, whose windows were decorated with the magic word “sale”. What happens to the Americans (especially women) when they see this word is possible to describe only by cabaret skits of Ani Mru Mry comedians. “The madness of sell-offs” phenomenon is here, and is not an empty advertising slogan. When I walked through the shops during sales in Poland, I have never came across a mess similar to that at H&M. It has be emphasized that it was not the fault of the staff, as everyone were truly doing their best.

I do not really want to hear, how are you!

Americans are very polite. Friends shout to each other from afar, “Hello, how are you?“. Saying “from afar” I mean a really long distance. So long, that if I were in their place, I wouldn’t be sure if I ought to have been the receiver. In the same way employees of stores greet customers. Likewise tourists greet other tourists on the tourist routes. Although this greeting is consists of a question, if someone answers, they will bring about a lot of puzzlement. A critical system error, blue screen in their eyes 😉 In such situations, one should behave as if the question did not exist. Just say politely “hello”, tell them what you need – it’s not inappropriate. This is just the way it works in US.

There are also other ways of showing courtesy in US. Americans laugh at not-at-all-funny jokes (unless they are your trusted buddies – then they will be honest), are active participants in discussions, ask questions, or listen attentively. If they do anything which after some time they consider a blunder, they will always apologize. And they apologize often. Once I met an American from California at a train station and she told me about this phenomenon. She added:

– At first, when I started living in Poland, it made me very upset that no one here apologizes for anything. I felt offended. Now, when I go home and hear everybody apologizing for everything, I’m annoyed. Why they have to apologize so much? In this respect, I prefer Poland. 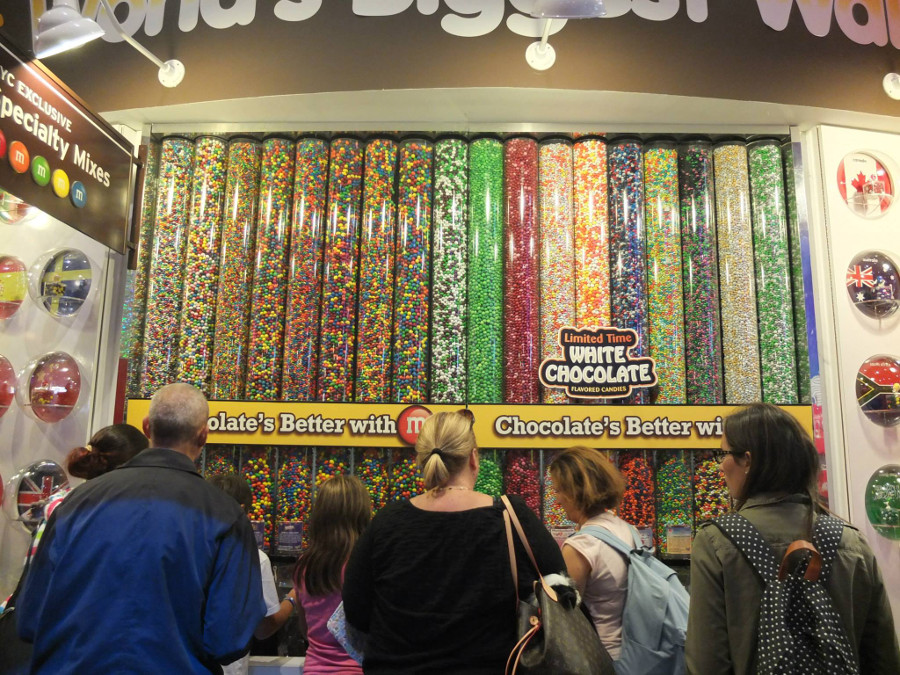 The sounds of gunshots do not necessarily mean, that there is a move being made nearby

In New York it is very comfortable to travel by subway. Prices, regardless of the number of transfers, are a flat rate, and are deducted from a magnetic card. The biggest downside of subway journeys are truly tropical temperatures that prevail inside. Because the design of the New York subway is old, it does not have air conditioning. Fortunately, in wagons it is already much better. Sometimes the entire metro line will be temporarily out of operation because there is a shooting of a movie or show. An abundance of laying on the road cables likely means the same. In this situation, New Yorkers tend to draw their smartphones, cameras, tablets, and film and photograph everything they can. Later they post it on Facebook or Instagram. Some of them like to capture every second of their life, and mainly plates before and after eating.

When an accident or incident involving armed criminals occurs, the streets are also blocked and guarded by police. Therefore, caution should be exercised when faced with an enthusiastic crowd of bystanders making photos and videos. They might as well film the criminal. Such cases, contrary to my expectations, are not rare, and it happens that one or more people in the crowd of bystanders gets shot here and there. 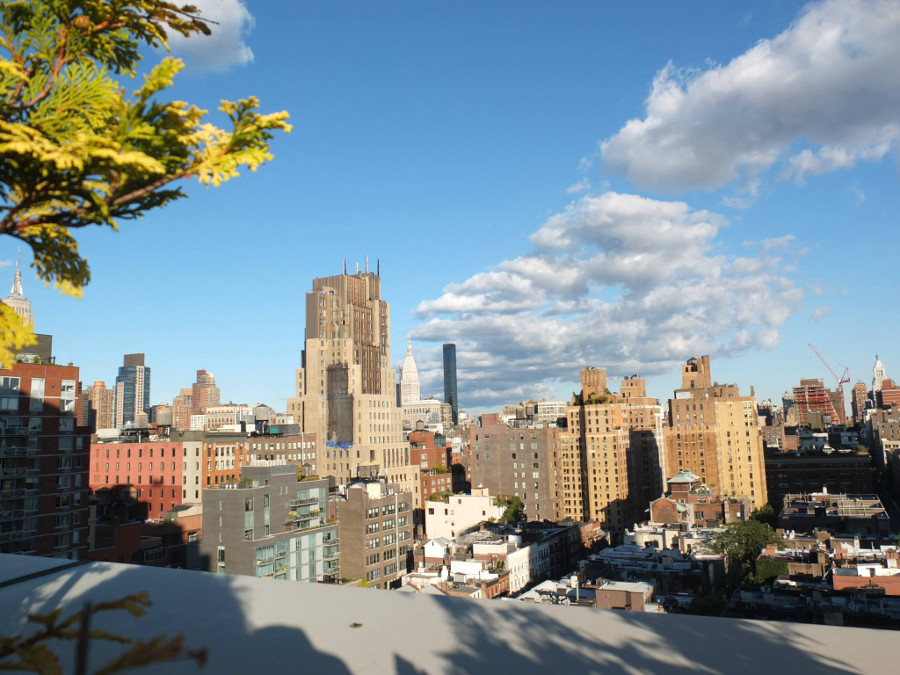 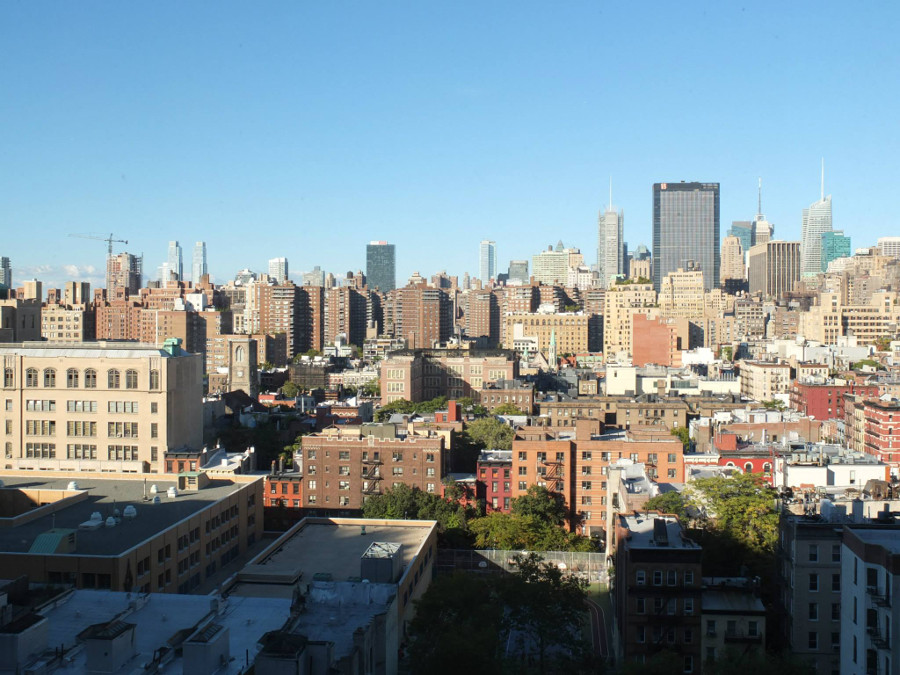 Here you can surely relax…

In New York it is possible to drink water from the tap withut any worries – it is very tasty. In the parks it is possible to come across taps with drinking water. Identical to those in Japan! Many of the buildings still have water towers on the roofs, and they are still in use. Just as old fire escape stairs. NY lures with the mass of shops of well-known companies (without mentioning the apparel and footwear shops): Lego, M&M’s, Lindt, Apple… All rich and enticing, and I assure everyone, that it is worthwhile to go to at least look. That day, the cherry from the top of our New York cake was our visit to one of these big, well-known corporations, but not to a store… We visited Google!

The company is located on several floors of a modern building in Manhattan. The windows of offices offer a panorama of the city, full of concrete and glass skyscrapers. Balconies are decorated with flower pots in which not only flowers can be found. They grow also fruits and vegetables, hence the pots bear the mark “You eat at your own risk“. Open spaces are spacious and colorful. It is visible, that employee’s creativity is not blocked here, it is being strengthened. The corridors are decorated with the works of employees. There are libraries with fabulously arranged interiors – if someone wants to read in solitude, they can close themselves in one of the small private cubicles with armchairs. Those rooms are hidden… behind bookshelves! As in a castle with hidden chambers! When an employee wants to have a rest from mental work, at his disposal they are different “play rooms”. They can find Lego, billiard, consoles, table tennis. Employees also have access to a gym. Employees can move through the corridors of Google using scooters, but only them. Canteens and kitchens are also amazing – a fridge full of goodies and beverages, delicacies and candy jars, bowls of fruit. In addition to the standard coffee maker, you can find a machine to make popcorn! Working? Only in Google 😉 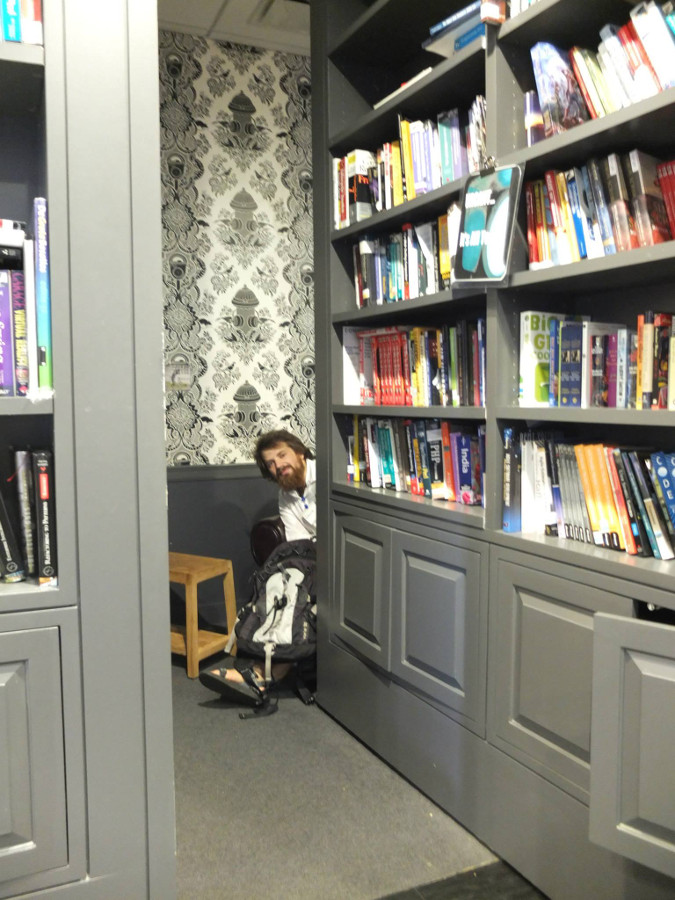 A hidden room behind a bookcase in the library 🙂

Since you are able to imagine how does the Big Apple look like, how does it smell, and what’s up there, next time we will taste it. And New York definitely does not suffer from shortages of food 😉

If you plan to fly to the States and go there for shopping, be sure to check their local sizes. This site will surely be helpful.