It would seem that at the railway station there is nothing that would impress anyone. What is more, it should be a total boredom. All in all, this is just a station and some trains, everybody knows this stuff. But I dare say that for an attentive observer a train station is an amazing mine full of interesting information. Train gives them the ability to satisfy scientific curiosity and study different behaviors and cases which can be found in these crowded public places. And, believe me, railway stations in Japan are almost always crowded.

An interesting grasp of Japanese trains by Romain Alary

Before I get to the most interesting subjective observations related to the Japanese public transport, I would like to share with you some information that will surely prove to be useful during your stay in Japan.

My husband and I used Suica cards that allowed us to use trains and subways. These are plastic prepaid cards – one can add value to them using special vending machines available at every station. The cards use the same principle as the metro cards in New York, but unlike them the Suica needs not to be inserted into the machine. One just needs to wave the card over a reader. To pay the toll two conditions have to be met: the card should be used at the reader located in the starting railway station and at the destination station. Sometimes the card is not working properly. Fortunately, then one should just give the card to the employee at the entrance/exit, who will reset it. Suica has an interesting promotion for tourists. If the purchasers show their passports, they will not only receive a promotional price for the card – even the Narita Express ticket will be cheaper.

If a tourist is planning to travel a lot in Japan, it is cheaper to order a Japan Rail Pass card. This card is issued in Japan – only the purchase confirmation is sent directly to the buyer’s home. For this reason, the JRP should be ordered in advance. However, the order should not be made too early because the confirmation of purchase is important only for 3 months. The options are 7-, 14-, and 21-day, adult or child, ordinary or to the first class. This card allows unlimited travel throughout Japan by all trains, buses and ferries of the Japan Rail company. In the case of the subway – the card is valid only in Tokyo and Osaka. You can even use the Shinkansen, except for two: Nozomi, and Mizuho. Suica is not valid for the Shinkansen lines – we had to buy separate tickets 🙂 In addition, holders of the Japan Rail Pass have the possibility to make a free reservation in trains that allow such an option. To get the JRP card, the tourist should go to the JR office with the confirmation of purchase. There, after completing the appropriate form, the card will be issued. Offices are located at major railway stations. The first office available for tourists is located at Tokyo Narita Airport.

Shinkansen is a very expensive way of travelling – the costs are comparable to the prices of airline tickets. At the same time it is the fastest and almost trouble-free – the average delay per train in 2012 was 36 seconds. For potential users of Shinkansen trains – Japan Rail Pass is definitely recommended.

Trains and subway in Japan depart very often, even every 5 minutes, while long-distance trains, express trains and Shinkansens – every half hour. Details are always worth checking – this search engine should be helpful (it is very good and used by the Japanese).

Stay away from my panties!

Strong experiences on the Japanese culture start at the train station’s escalators, where an eye-catcher is a sign with a crossed cell phone. Contrary to the first connotations, it is not about prohibition to use mobile phones. Thanks to the text in English “Watch out for upskirting” all the pieces of the puzzle are beginning to fit together. What is it about? 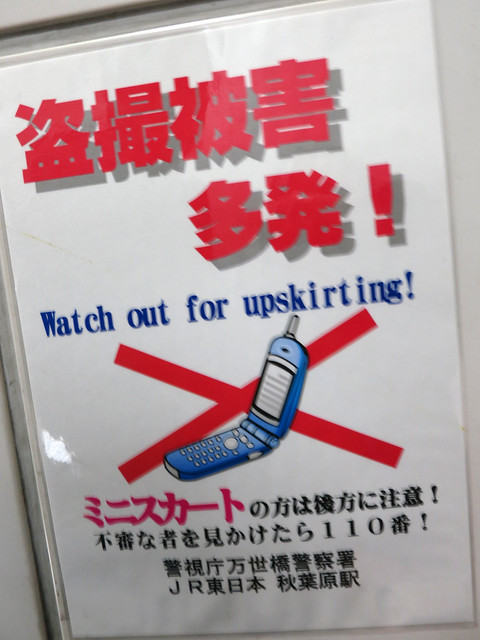 The Japanese have a weak spot for women’s panties. It is so great that they can take the opportunity to take a picture with a mobile phone of a girl’s panties (if she has a fairly short skirt and goes before them on escalators). An experienced photographer is able to make such a picture in a dense crowd – the victim will not even notice.

As if that were not enough, some Japanese find delight in an underwear that is… used. It is possible to purchase such an item in special, well-hidden machines scattered around the city. Personally, I’ve never seen them, although I’ve seen a lot of vending machines in Japan. Those vending machines with the panties must, therefore, be carefully hidden. Used panties can be also purchased at an auction site. Online auctions offer a wide range both in terms of design and… the number of days of continual wearing the offered panties. This business is so lucrative that packages with used underwear are sent even from Europe.

At this point, one may think that all moments of skirts lifted by the wind in manga/anime are caused by love for panties of Japanese men. It is possible that this is partly a good reason for it, but my experience would indicate a slightly different one. The Japanese are excellent observers of reality. Wind gusts in Japan are also specific in their nature. Several times I walked through the town in a skirt, which I thought was impossible to lift by the wind blows – to my surprise, Japanese wind had no problem with dealing with it.

The floor of Japanese platforms is full of different lines. Some have bumps to help blind people in navigation. Others show where exactly stop individual wagons, and where one will find the entrance to them. Trains stop at the exact point indicated by the lines. Always. With this knowledge, the Japanese form the queue in advance. Of course, not directly in front of the entrance but on the right and left sides of it, so they will not to block passengers leaving the train. In addition to the fact that the train stops perfectly in the designated areas, many platforms are equipped with special barriers with automatic doors that open only when the train stops behind them. Also, at the platform walks at least one service worker. Why? Those workers and barriers are to effectively stop people from committing suicide by entering onto the tracks. Because the train, apart from being one of the primary means of transport in Japan, is one of the most popular ways to take one’s own life.

Among the train passengers one can find housewives, sometimes women going to work, often men in black suits, white shirts, and ties. These are employees of respected companies, usually corporations, in which ranks they will most likely spend their entire life. Some of them, especially the elderly, pin to their elegant leather briefcases colorful pendants. These are the gifts from their beloved children/grandchildren.

Crowding on the platforms are also school-age children. They are wearing different uniforms in a similar fashion, but different colors. Little girls wear skirts of the length reaching below their knees, but the older the girls, usually the shorter their skirts become. Older girls usually wear skirts above the knee. If it is shorter, or even ultra-short, it is a sign that the girl’s parents are quite liberal and progressive.

The whole crowd usually behaves quietly and calmly. Until the train is delayed…

This picture is probably know in the whole world (source: gigalol.pl)

The most crowded Japanese train lines during peak hours run every 5 minutes. They are well connected to the other lines – when one lives the train, on the other side of the platform usually the connecting train awaits, so changes of the line are smooth. Sometimes, however, there is a delay – usually as a result of someone else’s carelessness (passenger gets hurt) or police action. The biggest delay I witnessed reached 12 minutes. Nonetheless, already at 2 minutes the behavior of the crowd began to differ from the standard one. It was easy to distinguish who hurried to work. Employees began to carefully look around, and their faces were strained with dissatisfaction. They started to use mobile phones. Did they inform their bosses that they would be late?

It is professional to have make-up

When the train stops, the crowd starts a quiet struggle for a seat. Nobody pushes, everyone comes by their order. Outside the railway staff reminds to be careful when entering the train. In the middle of the wagon the agility and speed play a major role. Under the principle of “when you go to Rome, do as the Romans do” I acted like the rest of the passengers, and gained a seat in the air-conditioned Japanese train. However, when I sat my eyes met a gaze of a Japanese woman (about 40-50 years old), who was walking behind me, and was clearly hunting for the same seat as me. It was the last one. I can not describe the emotions that were painted on her face at that very moment, but I felt that in her head she is killing me in 1000 and one ways. I got up, smiled and showed her that she can sit down. She politely thanked, and sat down. To the end of the trip I was standing, but I do not regret it 😉

<
Jingles from the Japanese trains – I heard some of them personally 🙂

I’m 165cm tall. Most Japanese were half a head higher. However, Japanese women (although in heels) were generally smaller than me. All the ladies wore make-up – more or less visible. What really surprised me was that a lot of men in suits also had makeup on their faces!

In the trains one can meet very interesting people. The four main types of them are: troubled helper, fan of electronic devices, reader, and the one in “need”.

But what the most distinguishes Japanese trains from the other trains? Those are most likely pushers, and jingles. Pushers are people who stuff passengers to the train. The most difficult task awaits them, of course, on a Friday and Saturday night as well as during peak hours. Those who do not fit into the car are waiting for the next one, sleeping in a rented space, or sleeping at the station. Jingle melodies are played at the platforms when the train stops. Each line has its own. In addition, Japan introduced during rush hours special coaches for women only. This decision was made due to the large number of complaints of the female passengers who have been groped in the crowded train.

The train took us to Odawara and afterwards to Hakone. I invite you to explore the castle and take a walk at a very dangerous natural trail with us 😉