I have never hidden that I love to eat. For this reason, while being abroad I try everything rustic and within my finance range. From times immemorial I identified New York with the taste of steak and fries, which was quite an accurate representation. However, had a wonderful opportunity to learn, that this great city offers so much more goodies than a cow with potatoes…

The offer of restaurants is practically unlimited. You can find a restaurant or pub in NY specializing in virtually every kitchen of the world. It is caused by cultural diversity of the city, as well as demand. The more, that I was a witness of sharing a meal (appetizer, main course, dessert) on Instagram. Sitting next to me man photographing his food and empty plate aftereards. Put yourself in his situation, how many times would you put the same spaghetti on Instagram? 😉

In the case of restaurant checks, the old rule that “the more customers it has, the tastier food is” applies here. We had to wait for two hours in a line to eat delicious ramen in Totto Ramen. But it was worth it to stand and wait – ramen was insane! 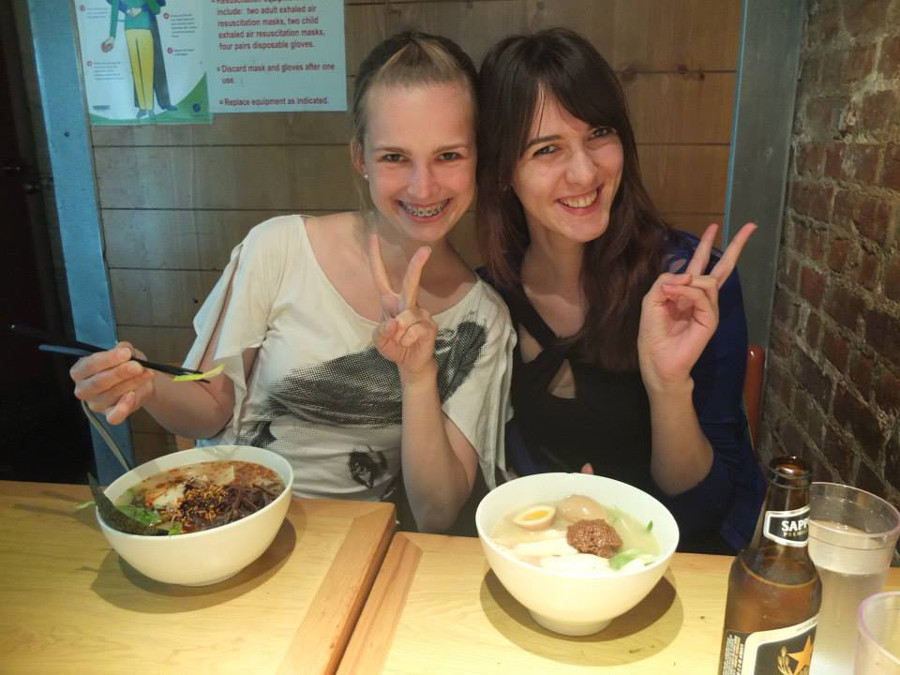 With Natalia – this ramen was worth the wait!

Not all restaurants can be accessed without a reservation. I recommend checking terms with approx. one month’s notice. Even before, if this is a molecular restaurant. This is the type of restaurant combining the kitchen with a little bit of science. Thanks to this combination it is possible, for example, to try ice cream frozen before your eyes in liquid nitrogen or gold medallions which, when dissolved in hot water, become turtle soup. And although the best molecular restaurant in the United States is located in Chicago, in New York are also lots of interesting places. They are not purely molecular restaurants, but great amount of fun is guaranteed. An example of such a place is Ninja Restaurant, which we sincerely recommend. Waiters dressed as ninjas popping-up from different places were the biggest surprise that night 😉

To many restaurants a person can come dressed as they like. Unless a restaurant asks to come in more formal attire, there is no dress code. This was the case Ninja Restaurant, but it turned out that jeans and shirts are regarded as smart casual attire. Some of the guests were dressed up in usual t-shirts and it was not a problem whatsoever. 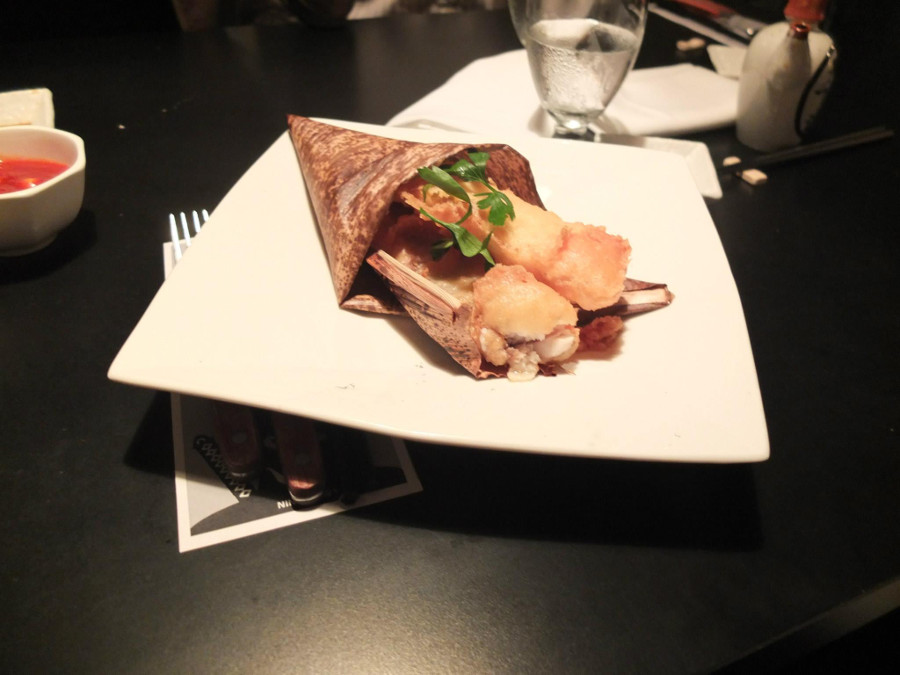 The smallest entree at Ninja NY

We had a choice of sets consisting of at least a starter, main course, and dessert. If near the dish a shuriken was placed, it meant that it would be a dish with some special effects. It might have been light-up plate, liquid nitrogen evaporating from a pot, burning meat in front of the customer, and the like. It was a pretty cool entertainment. Unfortunately, great American restaurant menus’ disadvantage is, that they usually do not give the weigh of their dishes. If they do it, then it is given in ounces – about the size of an ounce I have no idea at all…

Having taken into account my previous experiences, I took a set that seemed to be appropriate for me. Also, because the main course was teriyaki chicken – from a visit to Japan I remembered, that these were small pieces of roasted meat in a delicious sauce. What was my surprise when I received a monstrous-sized chicken breast! I was not able to eat half of it. The same pattern is repeated in all the restaurants we visited in the United States. The portions are so huge that my husband and I ordered only one starter and one main course for the two of us 🙂 Our friends from New York used this fact to their advantage. When someone does not want to cook, they go to their favorite Italian restaurant and order one main course for two. In that restaurant portions are so big, that they manage to satiate and take the rest home as takeout – no cooking a meal for the next day 😉 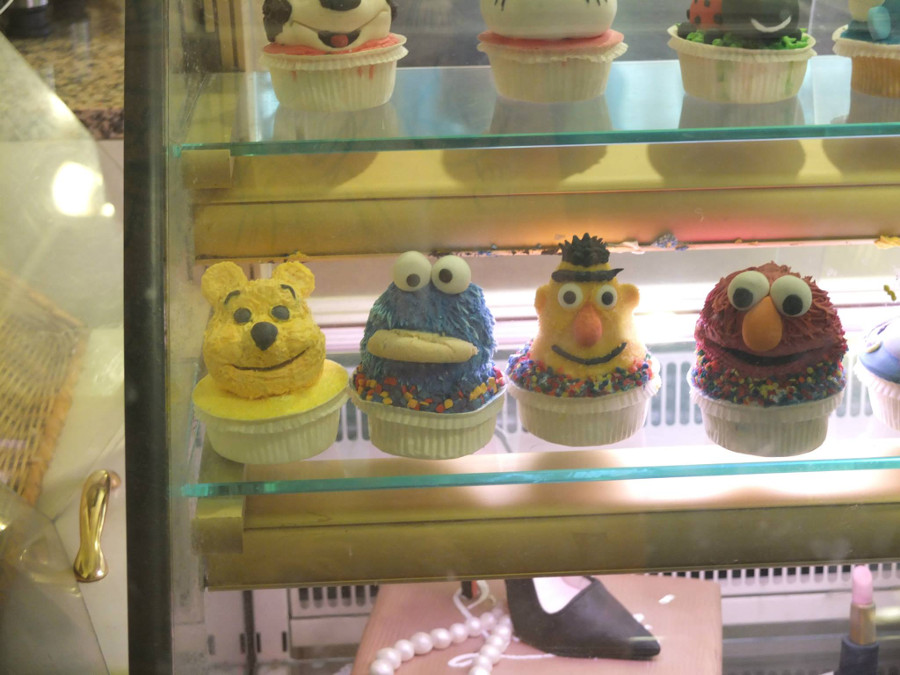 When we finished the meal, the waiters came to entertain us with all sorts of tricks. Afterwards we could give the waiter some extra money. Apparently waiters’ basic pay is very low. Therefore they have to depend mainly on tips and other additional forms of income in their workplace. Depending on the policy of the restaurant, the tips may go either to the waiter serving the table, or on account of the whole team, and then shared among the employees. This is also the source of the custom of individual tipping for the tricks.

The method of paying the bill is different from that in Europe. First, the waiter brings the bill to with the listed dishes, their prices, and the amount to be paid. If everything is correct, the waiter is given the customer’s credit card. After a while, the waiter returns with an other, extra card, on which the client should manually enter the amount of the tip and put his signature, which is used for operations with the card – is an agreement to charge the account. If being pay by cash, the tip can be given at the same time – within the limits of good taste and common sense is the amount between 15 and 20% of the bill. Although leaving a tip is usually optional, groups of 6 or above are obliged to leave a tip. 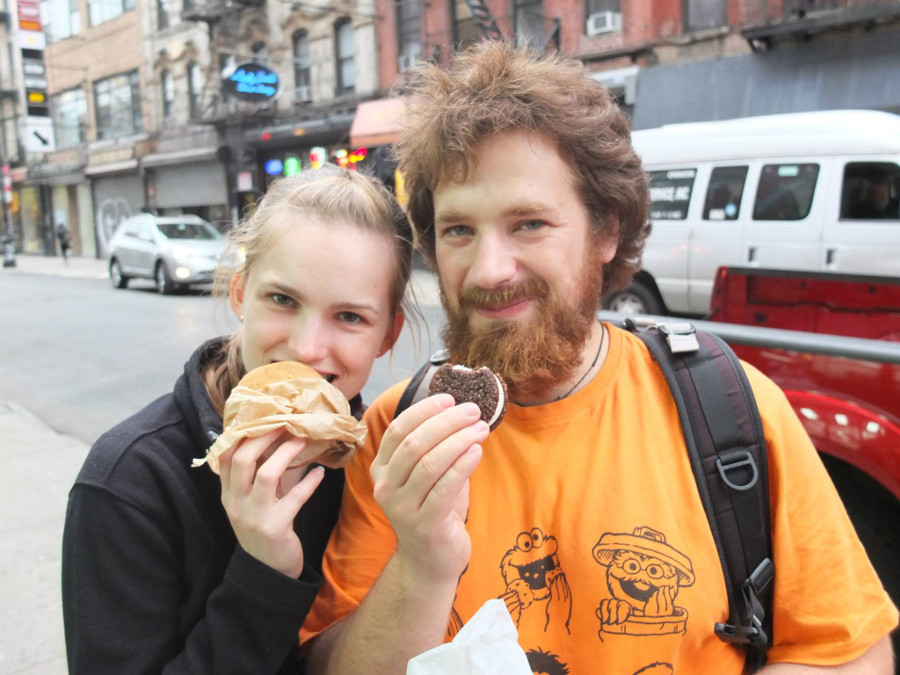 Sandwiches from the Melt Bakery. Looking at this picture still makes me very hungry…

Apart from shops of the famous confectionery companies and less well-known, but very expensive, I recommend two amazing ice factories from NY. The first is sandwich-styled (Ice Cream Sandwich). It is a thick serving of ice cream covered with two soft biscuits. We purchased them in Melt Bakery. The assortment is changing here every week, and the flavors are mostly sweet. I was full after eating one such sandwich, though it was not large. I can not imagine how much calories they have then 🙂 The prices are very affordable ($3 for a mini, $5 for regular), so I recommend checking it out!

After this delicious ice cream, one can hit Chinatown, and, more specifically, the Icecream Factory. I guarantee that from their great selection of strange flavors everyone’s head would spin. I bought two scoops of ice cream (flavored with durian and rice cooked in milk), and I have to warn you – scoops are quite big and I worked very hard to stuff them into my stomach 😉 If the standard Polish scoop of ice cream gets multiplied 2.5 times, Poles will have the idea about one scoops here. Chinatown itself is highly recommended – it’s full of massive amounts of authentic Asian products, from fruit to tea. The atmosphere also is unique. It is quite crowded, but far less than the Brooklyn Bridge 😉 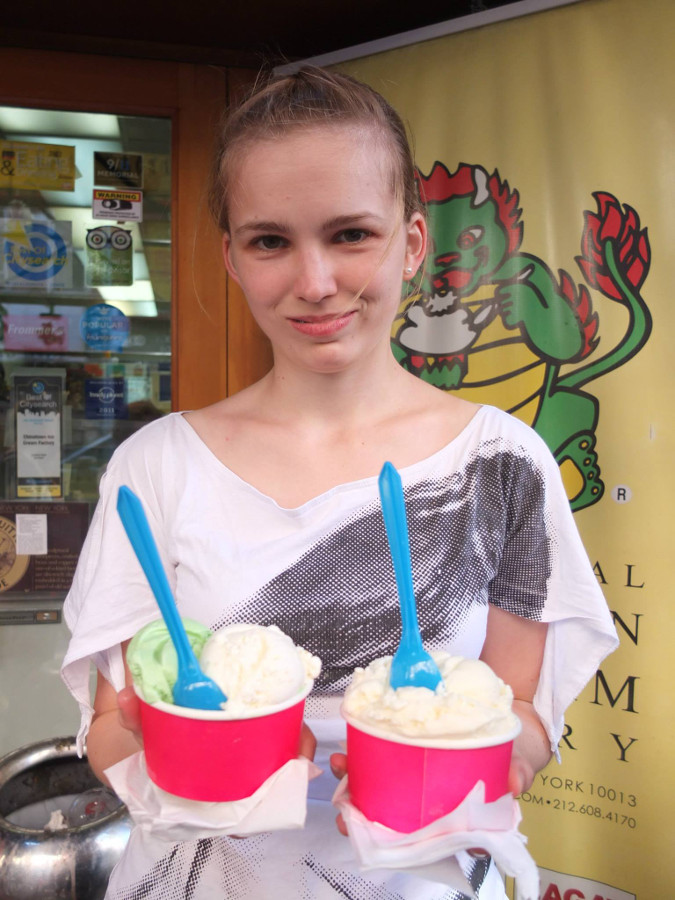 As you can see, two scoops of ice cream is a large portion

Unique fast-food restaurants and those well-known

I will write just briefly about those well-known: it is not worth wasting one’s health. All are extremely greasy, with no flavor at all, they would kill any liver. Moreover, I dare say that KFC is the worst of them all. Being able to compare the standards of my favorite KFC at the mall ETC in Swarzędz, it is hard for me to say anything good about the American KFC. The difference is huge, with a large disadvantage for United States.

However, there is one place that I can honestly recommend to you, and is located in Chelsea Market. There you can eat lobster on the spot, waiting only a few minutes, or buy already prepared one to reheat it at home. Considering how luxury a good a lobster is in Europe, I strongly suggest you to try it on the east coast of the United States. Prices are “digestible” and impressions are unforgettable. The only downside of the ready-to-reheat lobster was the lack of water in the claws, but it was compensated by good quality of the meat. Can anyone imagine that once this rarity was food for the poor? 😉 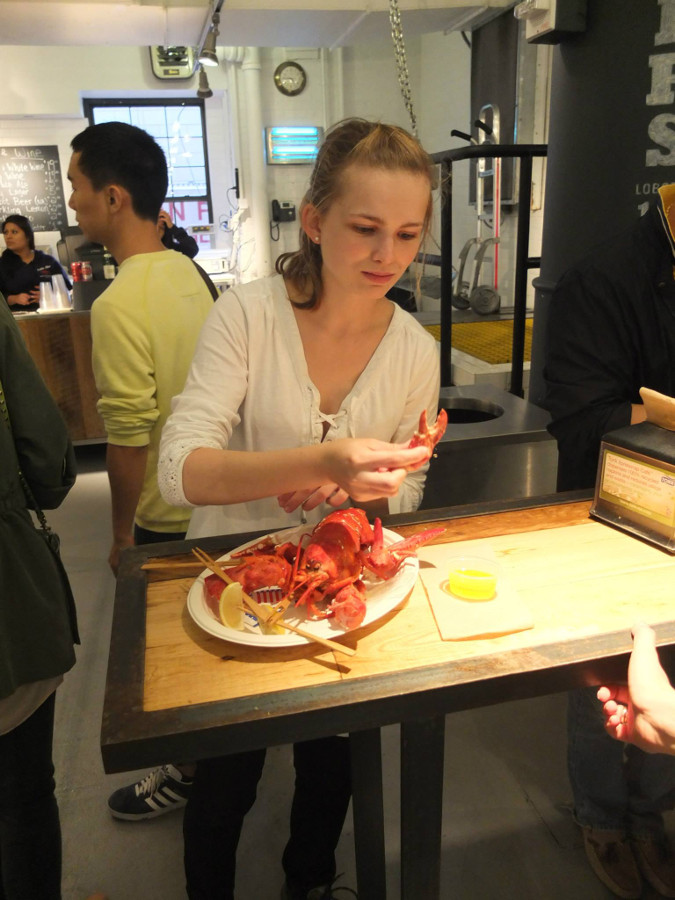 My lobster debut 😉
How to properly eat lobster? An instructional video.

The assortment of shops

In my opinion, this point is a total failure of the whole country. Until now I have been to only two English-speaking countries and dare say that in both there is the same problem with good-quality food. To be more frank – it’s in small quantities, apparently well hidden. I suspect that it is the fault of both the consumer (nutritional ignorance or simply they enjoy such products) and higher instances (manufacturers, poverty). Still, I must write how it looks from my perspective.

Fruits and vegetables are on the same aesthetic level as in Europe. In their quality and taste I sensed little to no difference. The problem comes when you want something else, eg. cheese. Most of the cheese is highly processed and, for me, inedible. We bought one out of curiosity which was supposed to be a regional delicacy in Wisconsin (with almonds, in a strange color). Without bread, I could not eat it. Yogurt tasted very artificial, as if they were thickened with flour. Even those organic. Meat is just a meat-like product. I saw some pieces that looked quite interesting and even healthy, but I could not check them, because of the lack of access to a kitchen during the trip. For this reason, I do not discredit the meat completely. Be warned, however, that ham, pseudo-sausages and the like is a dietary suicide. Even more scary is, that sweets are everywhere. Literally. We also tried Nutella. It seems to us that it is fatter and more nutty than in Europe – it easier to spread it on bread and a lot of oil precipitated from it, even when it was in a fridge. In a word – do not lose your head when you enter the US supermarket 🙂

Next week we hit the road again. Can we handle the new environment? How will we get through the first day behind the wheel? What’s going on in American radio? How noisy are the squirrels? I will soon post those and many other things soon 🙂 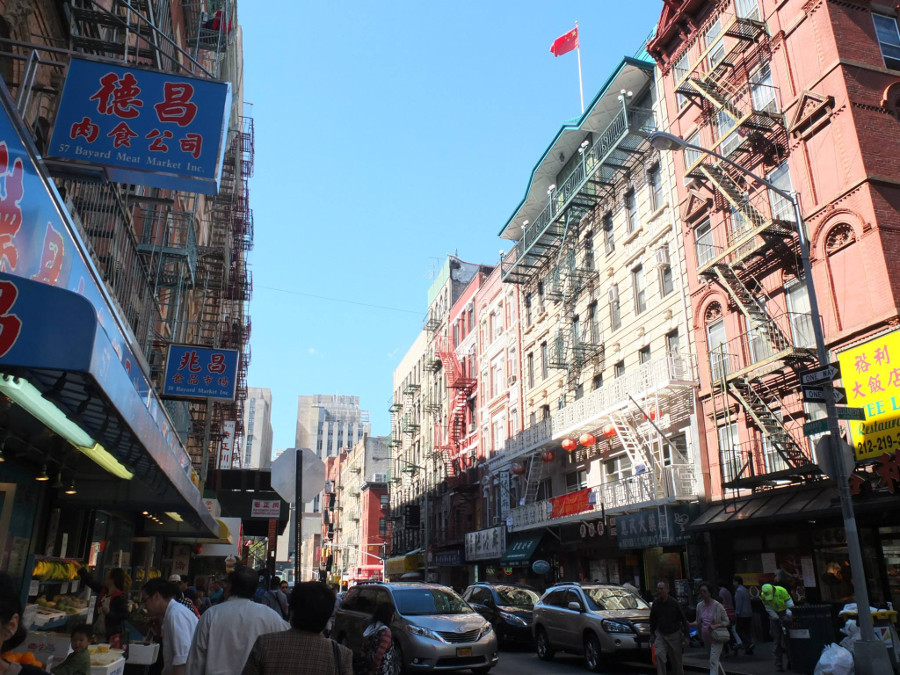